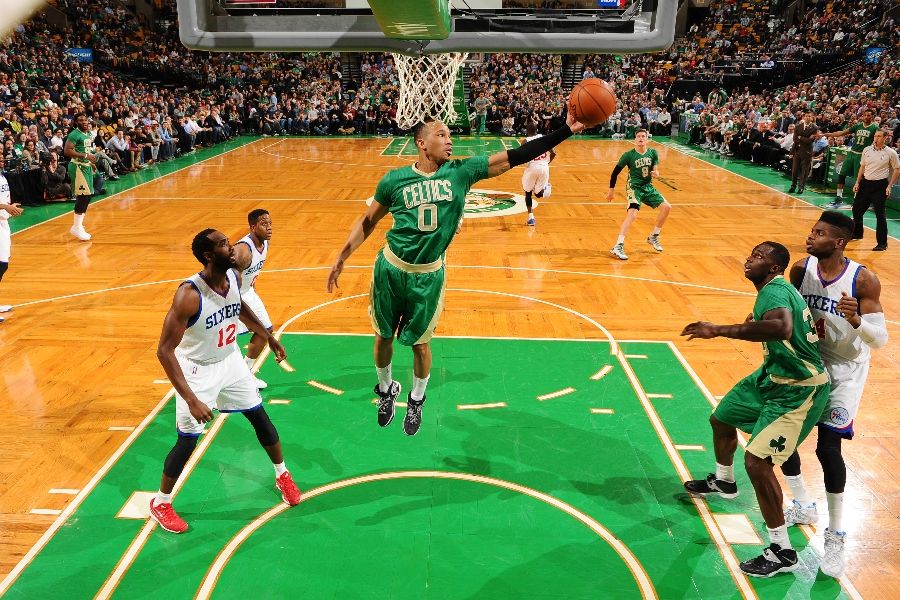 The Boston Celtics have a rebounding problem.

Previously, we reported on how Brad Stevens plans to use big men to box out while rebound in an effort to maximize the roster we have, notably worse than last year’s squad with the departure of Jared Sullinger, a team which, even with Sully, was five places from last in the NBA off the glass.

While the egg laid against the Chicago Bulls last week was only one game, the Bulls shot 44% as a team from deep, and 39.1% overall, handily winning the battle for offensive boards 18 - 3.


Is there a connection?

To some extent, this has to do with the (unsustainable) success the Bulls have had shooting the three, and rebounds also helped, but the strategy being used by Boston may also be a factor - feel free to skip to the TL;DR below if analytics aren't your thing.

Both the Celts and Bulls have played the Brooklyn Nets, with Boston scraping by, and Chicago blowing them out. Quite a few people smarter than me have put the Celtics far ahead of the Bulls in projected standings this year, and I don’t disagree. Could this “bigs boxing out, guards rebound” strategy help explain these results, small sample size that they are?


The Bulls’ contest against the Nets looked like what you’d expect, with Brooklyn connecting on a god-awful 16.1% from beyond the arc, and 34.4% overall to Chicago’s 40.7% from three and 50.6% overall. The battle for offensive rebounds was close in this game, too - 16 to 13 in favor of the Nets.

In comparison, Boston effectively tied Brooklyn’s effort from three (34.4% to 34.1%) while shooting - as they should - better overall (53.9 to 44.3%). While 34.1% from three is nothing to be proud of, that number is still a massive improvement for the Nets compared to their game versus the Bulls.


"Vivid in my mind is Avery snatching rebounds while others boxed out," says Stevens. Says that's what Celts will need to do to rebound well.
— Boston Celtics (@celtics) October 28, 2016


TL;DR: The current approach to rebounding suggests perimeter defense suffers when guards chase down loose balls. Also, Avery Bradley and Jae Crowder’s averages of 6.7 and 6.3 defensive rebounds per game respectively are likely unsustainable, and Al Horford's 5.3 total boards per game isn’t going to cut it, particularly when no other player on the team averages over 3.3.


Why is Avery Bradley rebounding at such a high level? He says he realized he could do more to help his team win, and now he's doing it.
— Boston Celtics (@celtics) October 30, 2016


While teams have moved away from offensive rebounding recently, who is getting them matters. Every team with one loss or less this season has a 4 or a 5 as leading defensive rebounder, excepting Russell Westbrook, Kevin Durant, and LeBron James's teams. Having guards and wings picking up slack on the boards can be done, but not without cost, and if unaddressed, could be an easily-exploitable weakness.


I'm fascinated to see what Brad Stevens can get out of Jordan Mickey if he plays regular minutes. Good rebounder, shot-blocker. #Celtics
— Adam Kaufman (@AdamMKaufman) October 26, 2016


If Boston wants to make a deep playoff run to attract quality free agents, it needs more boards, and as currently constructed, are only contenders through another team’s misfortune. They also have a salary cap tightrope to walk with an uncertain CBA future, so any solution to this problem will need to come cheaply. Some of the league’s best players will enter the free agent market over the next two years, and the Celtics want to compete for them.

Ideally, a player good enough to both solve rebounding woes and reach true contender status could be had in a trade. That’s unlikely, though, at least from a team-building perspective, and many teams may not make moves until the trade deadline. If rebounding turns out to be a serious issue, Boston may find itself facing Cleveland or Toronto in the first round, yet again an injury away from a first-round exit.

So, how to solve the lack of boards?

With the glut of big men in the league what it is, there’s a handful on one-year contracts who are unlikely to figure in their current team’s long term plans, allowing the Celts to maintain flexibility without risking projected growth. The question is whether Boston can convince a team to dance.

With that, let’s look at a few targets, each of which brings different options to the table.


Story: Zach Randolph first took his benching with a "grain of salt," but he could become the Sixth Man of the Year. https://t.co/yDLraXFthB
— Michael Scotto (@MikeAScotto) November 2, 2016


Zach Randolph: Z-Bo is fading a little, no surprise for a big man going into his 16th season. But the drop has been minimal given he's playing a third below his career minute average. His 7.3 boards per game (6.3 of which are defensive) would fill Boston's dearth, and his 14 points per game would allow him to start as a more effective version of Amir Johnson, or continue in the sixth-man role he has now. The Memphis Grizzlies seem aware of the waning lifespan of their current team, and might be convinced to let Z-Bo walk for the right mix of assets and players - say Amir Johnson and Boston’s 2018 first round pick, plus extension of the 2019 Memphis first round pick protection to top-10 through 2020.


Andrew Bogut: The Dallas Mavericks have a lot of issues to sort out with three straight losses to start the season. While that ship may yet right itself, it’s worth watching, because their roster could survive without Bogut’s boards, particularly if it sparked better team chemistry. Boston could use the 10.7 rebounds per game he’s been pulling down, mostly (8.3) on the defensive end. A package of Kelly Olynyk, Jonas Jerebko, and James Young might just be enough to pry Andrew loose from Dallas, given the uncertain status of all these players with their respective team's futures.


Ersan Ilyasova and Nerlens Noel: While we’ve been down this road with Nerlens too many times, the recent news about his knee and the strange acquisition of Ilyasova by the Philadelphia 76ers might make a deal work. Amir Johnson, James Young, and Gerald Green plus Boston’s 2018 first round pick would give needed flexibility for Philly’s front court via Amir while providing similar shooting, assuming Ilyasova and Green both regress to career means. They’d also get a chance to give Young the run he needs to develop, and an asset Boston can probably do without given the embarrassment of riches they have been trying to find space for of late.


Ilyasova is a player the Celtics should kick the tires on if Sixers waive him. 36.9 percent career 3-point shooter. https://t.co/mSkQtkFvGE
— Brian Robb (@CelticsHub) November 1, 2016


It’s also possible Ilyasova gets waived by the 76ers, wherein the calculus gets even simpler: fare thee well, Master Young. All possibilities worth monitoring - along with defensive rebounds - as the season picks up steam.