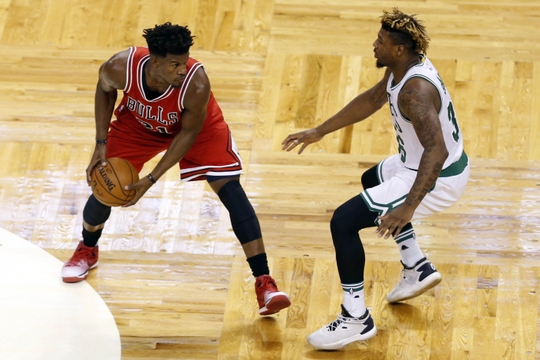 The Celtics got some payback against a Chicago team they lost to two games ago by winning 107-100.

Rebounding was an issue early on, but Boston hit the glass early. Even still, Chicago had 49 rebounds to Boston's 39.

After the first quarter Boston led 36-25. The second quarter was a bit of a mess as Chicago cut the lead to one and Jae Crowder hobbled off with a left ankle sprain. Jaylen Brown also had four fouls in the second quarter, as rookies tend to do, meaning coach Brad Stevens had to get creative with his substitutions.

Boston stayed in it and had a 55-52 lead at the half. With Horford out dealing with a concussion he suffered in practice, Boston needed a big to step up, and his name was Amir Johnson who had 16 points in the third quarter including far too many threes than one would think for a player like Johnson.

The Celtics entered the fourth quarter with a 81-70 lead. The team barely held on as the game was tied late and they brought home the win.

For Chicago, Jimmy Butler had 23 points and nine rebounds, former Celtic Rajon Rondo had 12 points and 10 rebounds and Dwyane Wade had 15 points.

The Celtics' next game is against the defending champs the Cleveland Cavaliers Thursday.