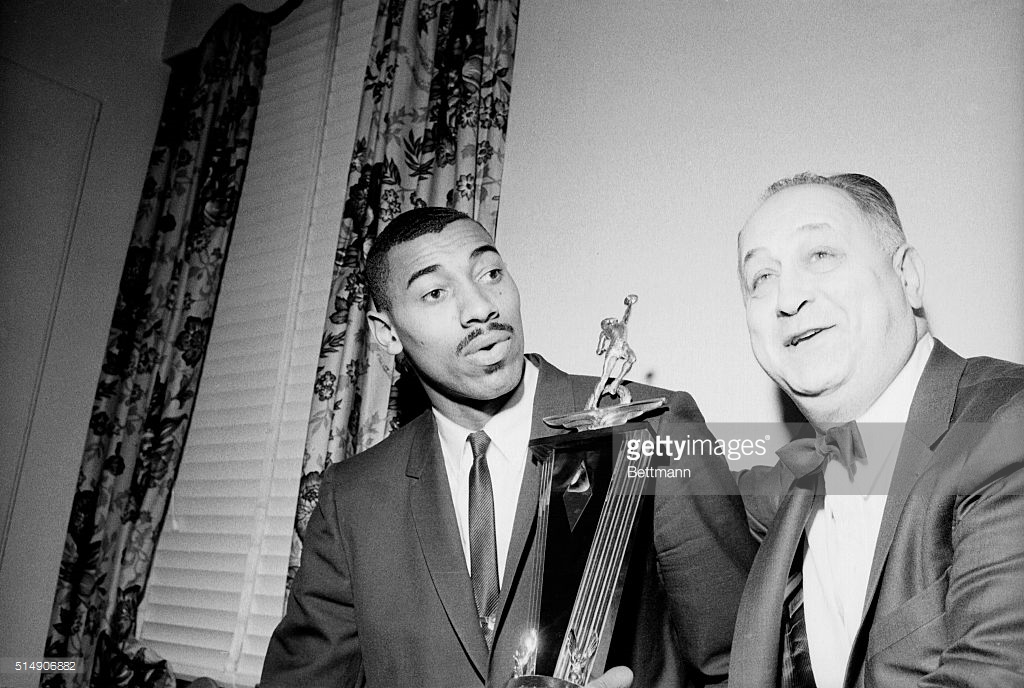 In anticipation of Wilt Chamberlain’s arrival on the NBA scene in the fall of 1959, owner Eddie Gottlieb lined up a whopping 31 pre-season exhibition games for his Philadelphia Warriors.

A born promoter and forward-thinking guy, Gottlieb had founded the nationally-prominent South Philadelphia Hebrew Association teams (the SPHAs) and was pretty much the guru of all things athletic – not just basketball – in the area dating to before the Depression. So naturally, the Russian immigrant was the go-to guy when a new pro hoop loop came a-callin’ on the Delaware Valley market in 1946, coaching the Warriors and Jumpin’ Joe Fulks to the league’s first title, ultimately purchasing the team outright for $25,000 in 1952 – rescuing it from certain bankruptcy, according to long-time publicist Harvey Pollack.

The business side of the league and its teams back then was largely a Mom-and-Pop operation – getting by with a skeleton crew, and heavy on the multi-tasking. Like a whole lot of those Depression-era kids, Gottlieb was averse to hiring someone to perform a task that he felt he could do himself.

Leonard Koppett, author of 24 Seconds to Shoot, puts it this way:

In the early days, the emphasis in the league by the owners was more on survival and staying in business than competition … [but] Gottlieb was the brains of the league. When anyone inside the league or outside had a question, they went to Gotty.


The optional, territorial round of the annual college draft, by which Gottlieb had obtained Chamberlain’s rights (not to mention the responsibility of paying his hefty salary, hence all those exhibition gates … I mean, dates), was a prime example of prioritizing butts-in-seats over competitive balance.

Now don’t go getting’ the wrong idea that these guys weren’t always “angling” to win, though. Red Auerbach was on the scent of Wilt Chamberlain before he’d even heard of Bill Russell – had even coached a high-school-aged Wilt in a little summer ball up in the Poconos. It’s believed that Mr. Auerbach may have dropped a subtle hint or two about Wilt furthering his education at one of the fine post-secondary institutions to be found in Eastern Massachusetts, particularly recommending a little place called Harvard.

Of course, a scrappy hustler like Eddie Gottlieb wasn’t going to take this lying down. At the 1955 NBA draft, while Chamberlain was dotting “i’s” and crossing “t’s” towards a diploma from Overbrook High School, Gotty staked his territorial right to the talented teen. Along with revealing his future pick, the crafty old codger – Gotty was pushing 60 by then – claimed Springfield-bound local hero Tom Gola of LaSalle, who helped the Warriors capture the NBA’s final pre-Russell title.

Wilt arrived back in the City of Brotherly Love as scheduled. Certain that his prodigy would be an even bigger gate attraction on the road than at home, Gotty petitioned his fellow owners to re-work the league’s economic model so that visiting teams would receive a percentage of gate revenue. When his proposal was rejected, Gotty went “old school” with his barnstorming tour.

Setting up the games was no problem and little imposition. Eddie Gottlieb – and Eddie Gottlieb alone – was the NBA’s Schedule Maker from Day One until his death in the late ‘70’s, a talent and process that baffled one and all. In the words of Al Attles, “Eddie would spread all those little notes [team requests/special needs] out on his desk – these crumpled pieces of paper. No one else could even begin to guess what he was doing.”

After selling the Warriors and overseeing their relocation to Northern California for two seasons, Gotty continued working for the NBA in a variety of capacities, including Supervisor of Officials and as a member of the rules committee.

Gottlieb’s 1966-67 NBA schedule is both perfectly proportional and bafflingly enigmatic.
For instance, 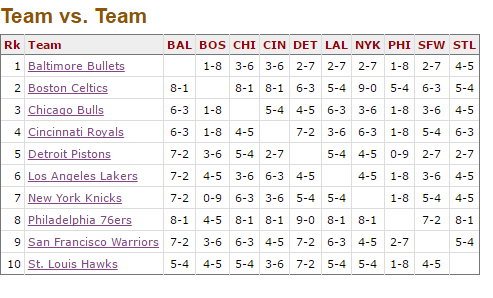 A slate of games can’t be any more balanced than that, huh – everybody plays everybody else exactly nine times.

Now this does create an imbalance of home and away games between any two teams – the Celts and Sixers would face off five times in Boston but only four in Philly during Coach Russell’s debut season – but that’s only the beginning of Excedrin Headache #1. 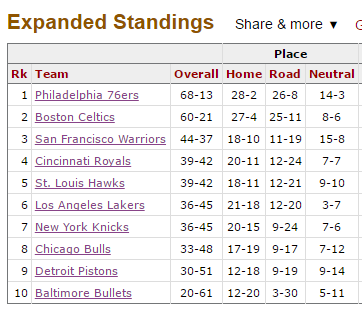 Overall home games range from as many as 39 (Lakers) to as few as 28 (Warriors), road games from 36 (Celtics, Royals) to 26 (Bulls). And everyone is scheduled for between 10 and 23 encounters to be conducted on neutral courts. Hmm!

In all, 84 of the NBA’s 405 regular-season games were conducted somewhere other than either squad’s home base, though some locales do seem a bit less neutral than others.

During that historic season, Gottlieb scheduled games for a 10-team league in 35 separate municipalities, from coast to coast and border to border. The Lakers and Pistons even competed once in Montreal. The poor Pistons were required to trek to 21 different cities; Detroit was also scheduled to play the opening game in 11 of the 19 doubleheaders on that year’s docket.

Perhaps fittingly, the Kings of the Road were Gotty’s Dubs, at 23 cities. The Warriors and Bulls alone played in San Jose, Fresno, Oakland and Evansville, IN in addition to San Francisco and Chicago.

Check out the Opening Week itinerary of the expansion Bulls. On the heels of a Saturday night opener in St. Louis and two open dates was a back-to-back in Chicago on Tuesday and Wednesday followed up with a back-to-back in California (San Jose and LA) on Thursday and Friday.

Gottlieb and the other old hands weren’t initiating the newbies or anything – that was Life in the NBA in those days. Coach Bill Russell’s defending champions were in line for three such four-night stretches and seven other “three-fers.”

That season commenced on Saturday, October 15 and wrapped up Sunday, March 19 (all four playoff series kicked off two nights later). So Gottlieb had a window of 156 calendar days with which to work, a full two weeks fewer than the 24 weeks of pre-playoff programming Adam Silver’s league gets to peddle these days to its various media partners.

This conundrum wasn’t going away any time soon, either. Over a decade later – and by the mandate of one of Gotty’s very last scheduling efforts – the final four games of John Havlicek’s illustrious Celtic career would be held on consecutive dates (including one in Providence, RI that by then was considered a “home” game).

BTW, when you have a spare minute, take a peek at No. 17’s stat lines from those games!!

Eddie Gottlieb symbolized those owners of the 1950’s. Those guys were street fighters. One minute, they were ready to kill each other. Then they’d calm down, shut the door, put their heads together and come up with the rules and ideas that made this a great game.    – Pete Newell

An index for "Sustained Excellence" is available here.