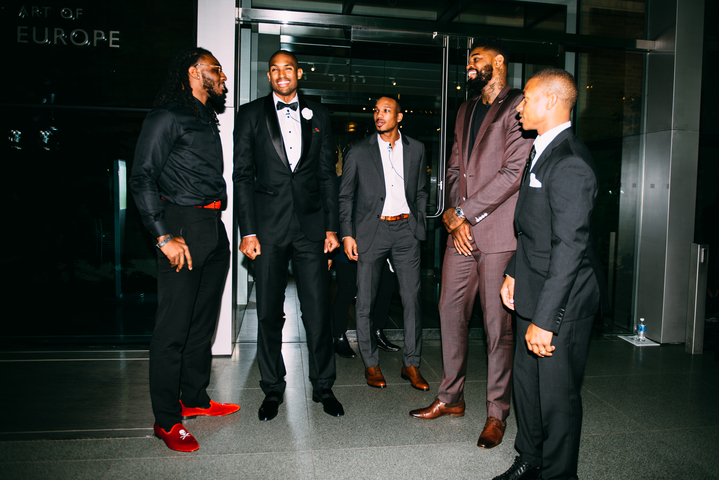 The Shamrock Foundation Gala may be a couple of days in the past, but let's review some of the whacky answers that Celtics players gave during a Q&A session to get a better understanding of the types of people on this year's roster (which is still not finalized, by the way).

Kelly Olynyk got asked the most Kelly Olynyk question you could possibly think of: is a hot dog a sandwich? Here's his take on the highly debated and controversial issue in today's society:

Based on R.J. Hunter's answer to this following question, his pregame playlist sounds on point:

R.J. knows where it's it-- Goosebumps is a jam . Any Travis Scott is a jam, but especially this one.

One fan wondered who the best five players that Al Horford has ever played against are:

Very wise to give KG the final nod on his list, only further capturing the hearts of Celtics fans.

I know he's no longer with us (sobs), but Ben Bentil took one right out of Marshawn Lynch's playbook when asked about his favorite pre-game meal:

Skittles saw this video and were about to make an endorsement offer to Bentil right before he was cut from the team. Alright so maybe that didn't happen, but maybe one day. By the way, I don't think that any candy qualifies as a "meal" unless you are a ten-year-old kid on Halloween. Jordan Mickey on the other hand had a more conventional answer of chicken and fish.

What in the world would Marcus Smart be doing if he couldn't hoop? His answer may surprise you:

Love this response by Marcus. Is there any other person in the league who would have this answer? I doubt it. He just loves houses, guys!


In other Q&As from the Celtics Gala:

Isaiah Thomas and Amir Johnson had some comments about their excitement for this season and having Al Horford when they were asked more serious basketball-related questions. The highlight of the summer for Avery Bradley was taking his family to Disney World and going on his favorite ride: Soarin'.

Terry Rozier is (jokingly) confident that Jaylen Brown can break up to 40 ankles from his deadly crossovers throughout his rookie year. Seems like a fair evaluation. Meanwhile in a very brief response, Brown tells us that Jae Crowder is the biggest jokester of the group.

The new owner of an eSports franchise, Jonas Jerebko, was appropriately asked what his favorite video game is. I had to look up his response of "CS Go" on Google to find out that he meant the shooter game "Counter-Strike: Global Offense".

Well, now we know some interesting facts about a handful of this year's Celtics squad (whether we wanted to or not). I'm sure you were just dying to hear Olynyk's opinion on hot-dogs and Bradley's favorite Disney ride.

P.S. I have got to find a way to turn the featured photo of this article into a poster for myself. Fresh. As. Hell.