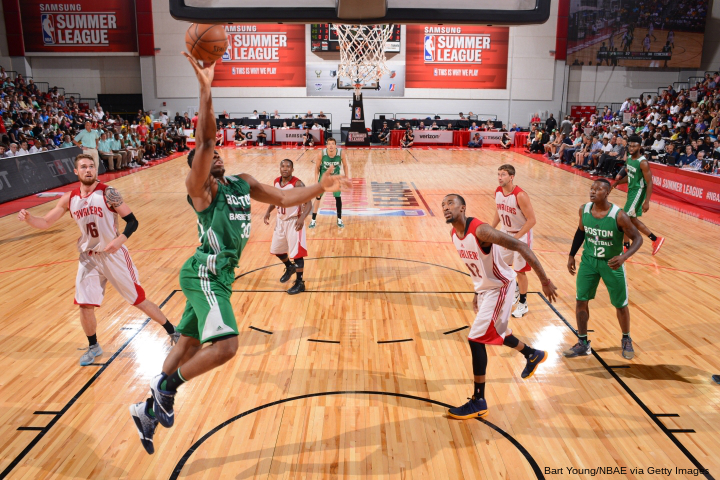 The Celtics are about to wrap up their summer league schedule, with just one final consolation-round matchup remaining tonight at 6 pm against the Trail Blazers.  Here are player power rankings for all 14 guys who saw action in Utah and Las Vegas:

14 - Mouphtaou Yarou: Did you know there was somebody on the roster named Mouphtaou Yarou?  He grabbed a pair of rebounds and went 0-for-2 from the floor in three minutes.

12 - Corey Walden: In his second year as a member of the summer C's, Walden only managed to get on the court in three of seven games.

11 - Marcus Thornton: The 2015 second-round pick shot 26 percent from the field with more turnovers (9) than made baskets (6).  Thornton also failed to score a point in Vegas.

10 - Malcolm Miller: Of the guys with no chance to make the team, Miller clearly had the biggest impact.  He started twice when Jaylen Brown was out and logged at least 15 minutes in all seven contests.

9 - Ben Bentil: The former Providence Friar got off to a strong start, averaging 8.7 points and 4.3 rebounds in 15.3 minutes per game in Utah.  Unfortunately, the 51st pick in the draft scored just six points total on 1-for-7 shooting in Las Vegas.  He did grab nine rebounds in 31 minutes though.

8 - James Young: Young exploded out of the gates, connecting on 6-of-7 long-range attempts in his first two outings.  However, he only hit one three in Vegas and was glued to the bench during crunch time of Boston's playoff loss to the summer Cavs.

7 - Demetrius Jackson: When RJ Hunter left the game vs. Cleveland with a sore wrist, both Jackson and Abdel Nader got the nod over Young.  The No. 45 pick showed off his speed (albeit with a few sloppy turnovers) and made some nice buckets in traffic at the rim.  Jackson also shot 36 percent from deep.

6 - Guerschon Yabusele: Yabusele started all seven contests, the only Celtics player to do so.  He led the club with 6.4 rebounds per game, but also displayed some impressive agility and ball-handling in the open floor.  Despite all of this, Danny Ainge still sounded fairly adamant that Yabusele will head back to Europe.

5 - RJ Hunter: Last year's 28th pick poured in 17 points and showed off his nasty side (not to mention hard work on defense) in a heated matchup with the Suns' Devin Booker.  Hunter was the team's third-leading scorer (10.2 PPG) and drained 46 percent of his threes (11-for-24).

3 - Abdel Nader: Far and away the biggest surprise on the ballclub, Nader's minutes rose steadily throughout the summer.  The 58th pick scored in double figures in all four Las Vegas games and posted the second-highest PER on the team (after Terry Rozier).

2 - Jaylen Brown: It took him a while to come around (and his knee injury certainly played a part in that), but Brown's last two outings more than made up for his slow start.  Against the Mavs and Cavs he put up a combined 45 points, 19 rebounds and 6 steals.

1 - Terry Rozier: This is a no-brainer.  Not only was Rozier easily the best Celtic, he was also one of the top players overall in both Utah and Las Vegas.  Rozier averaged 20.0 points, 5.3 rebounds, 3.5 assists and 1.5 steals while shooting 53 percent from the floor and 44 percent from beyond the arc.  He often looked like a man among boys, prompting Danny Ainge to proclaim that the second-year guard has likely already won a spot in Boston's regular rotation next season.