Roundtable: What would the Celtics have to give up to trade for Russell Westbrook? 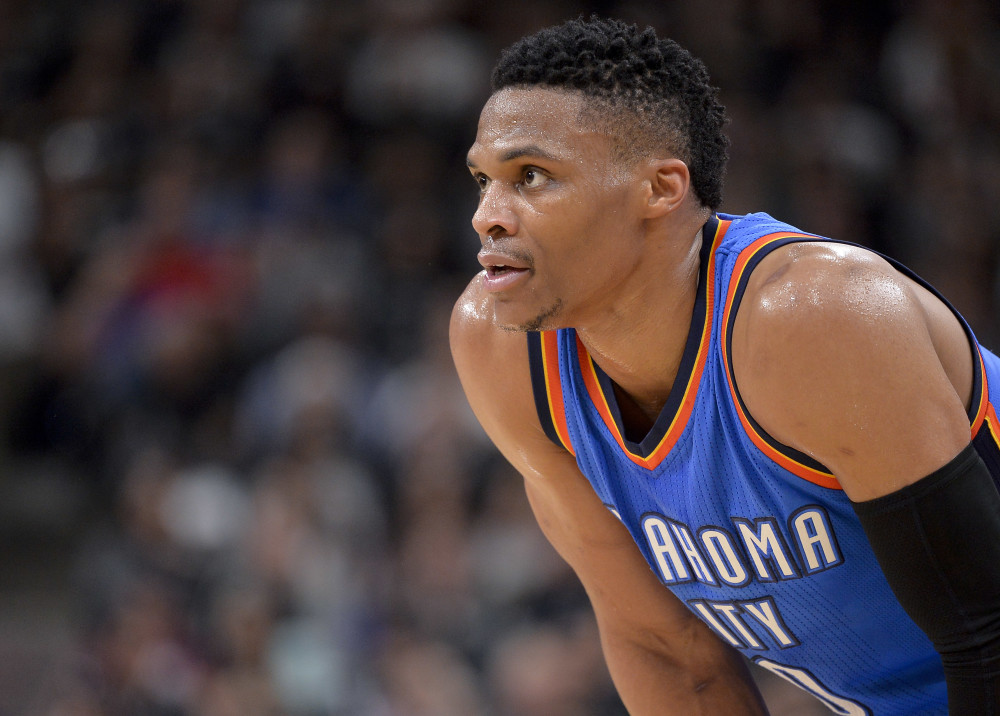 An embarrassment of riches has the Boston Celtics at the epicenter of every trade rumor regarding a start player. First came DeMarcus Cousins followed by Blake Griffin. The Celtics missed out on Kevin Durant in free agency, but maybe they were just targeting the wrong All-Star on the Thunder.

Russell Westbrook to Boston is now the hottest rumor in the NBA. 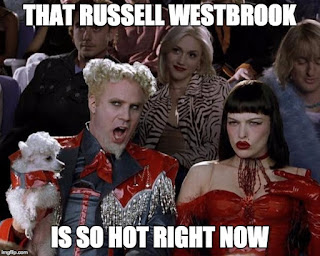 Here at Celtics Life, we are more than just writers -- we are fans. And each of us have a strong opinion on trading for Westbrook. To depart with our Brooklyn picks or hold to them: that is the question.

Here, you will read our very own Celtics Life writers and their takes on a potential Westbrook deal. Some responses are short and sweet while others leave you wondering, do sports writers have anything better to do besides talk and fantasize about trades?

That answer is no, we do not.

MattDotRich: Oh man, there's just so much to this trade. OKC is in a weird spot. Obviously, they can't lose Westbrook for nothing, and obviously that's why we're here. But there's an interesting basketball vs. business conversation to be had that makes their next move less clear to me.

From a basketball standpoint, clearly the best thing to do would be to acquire as many young players and draft picks as possible. But from a business perspective? They're a really small market, and I don't know if they're going to be willing to bank on unknown commodities. Which is why I could see a situation where they'd be more interested in Isaiah Thomas than you might think.

Past that, it comes down to if he's willing to take an exception. So I'll present two trades:

Brooklyn's 2017 pick and their choice of Isaiah Thomas, Marcus Smart OR Jaylen Brown

I can't see them having much interest in Avery Bradley or Jae Crowder unless other teams get involved. They're exceptionally talented complimentary players (and I mean that in the best way possible) but they're not what OKC is going to want.

Rob Welch: The only way you can make this trade is if Westbrook signs an extension:

Nolan Connor: There isn't a scenario where this deal happens and we keep the right to swap picks with Brooklyn in 2017. OKC will need a major rebuild and the potential of starting it with two top-5 picks (BK and their own) is too tempting.

Westbrook would never sign an extension anywhere because he would lose all his leverage next offseason. Take the risk and hope to resign him. Not many players have come to Boston and been unhappy. Crowder, Rozier, Amir, 2017 first and probably other non-lottery picks.

Brendan Quinn: I'm also in the "Westbrook won't commit to resigning before the season no matter what camp." That being said, I think if it gets done, the price ultimately won't be as astronomical as everyone thinks.

Eric Blaisdell: There's very little chance Ainge trades for Westbrook without having an extension in place so I'm not going to bother with a "rental package." That's just too big of a gamble with the possibility of him bolting to the rival Lakers.

If Westbrook wants to be in Boston long-term, the deal would have to include both Brooklyn picks and any three of Smart, Crowder, Bradley, Thomas, Rozier and Brown. Other rookies, second-year players and picks could be included, but that's the core of the deal.

It's a haul, but Westbrook is a top-5 player and adding him to Horford and whatever remains of the roster automatically vaults Boston into the upper echelon of the East. Say the three players are Bradley, Thomas and Brown. Oklahoma City would get a brand new starting backcourt and a guy with a ton of potential in Brown. Boston could role out Westbrook, Smart, Crowder, Horford and Amir Johnson with guys like Rozier, Olynyk, Mickey, Hunter and Jerebko off the bench. That's a damn good squad. Boston would still have future picks to draft with or deal for more depth. 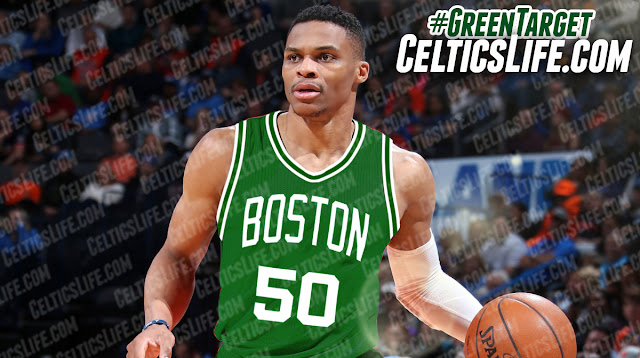 Topher Lane: My view is the Celtics front office will not make a deal without an extension in place. For a star like Westbrook, the Thunder will ask for a lot. For Ibaka they got a rising star in Oladipo, plus a rookie to fill Ibaka's role, and a veteran to handle it for the time being.
OKC would demand Rozier/Smart, Crowder/Bradley and both Nets picks. It would be costly, but with the way Rozier has been playing in the summer league, Ainge could maybe sell high and drop the price to one of the Nets picks.

Padraic O’Connor: We're all conditioned to ask the Celtics could offer, but are we even sure he should offer anything? Danny is in the power position right now; when OKC calls (if they do) Danny is in a great position to screen that call and let it ring a few extra times. If the deal isn't exactly what Ainge is looking for, he retains the power to hang up first.

Russell Westbrook is an amazing talent and will take this talents wherever he wants in 2017. If Boston is on his short list, Ainge should chase him then. Chasing anything now seems like an unnecessary risk; Boston would be inheriting too many question marks.

Mark Vandeusen: In response to Padraic, the Celtics have a much better chance of signing Westbrook next summer if he's already been with them for a year. Look at Isaiah Thomas--I doubt he would've signed in Boston, and now he loves it here. Along those lines, I think this is still a deal worth pursuing even with no guarantees. Al Horford is 30 and isn't getting any younger. Next year could well be his best season with the Celtics, why not make the most of it?

If the Thunder deal Westbrook before the season starts, my guess is they're throwing in the towel on 2016-17 and may well try to tank. I think they'll go for potential more than established players, so C's get to keep Isaiah, Bradley and Crowder. Here's the offer: Smart, Amir Johnson (for salary purposes), 2017 Brooklyn pick, 2018 Celtics pick and two or three of Rozier, Yabusele, Zizic, Mickey, Hunter and Young, depending on who OKC wants.

Even if Westbrook walks in 2017 you've still got a solid core of Isaiah, Bradley, Brown, Crowder, Horford and the 2018 Nets pick, plus tons of cap room on a team that at the very least just played in the conference finals.

Kevin Yazhari: Right now, it's too risky to do this deal because we don't know whether or not Westbrook would sign an extension with us, but if i were Danny, I'd pull the trigger eventually. I'd give Smart/Bradley, Rozier, Young, and both Brooklyn picks. For a top-5 caliber player, it's completely worth it.

Paul Colahan: Ainge has not been willing to force a deal during this rebuild, and it seems a little bit unrealistic to think he's going push in the necessary assets for a Westbrook rental. But at the same time, that's how you get any semblance of value in a Westbrook deal and I still don't totally understand why Westbrook would prefer to re-negotiate and extend as opposed to doing a 1 + 1 of his own next summer.

In a rental, you have to keep your best assets to beat the Cavs, go to the Finals, and hope Westbrook wants to resign. So Crowder and Brown become more valuable for that mission as the only two people you have that can put a body on Lebron. The 2017 pick-swap with the Nets is the Celtics best asset. The Nets are the reverse #1 seeds next year and it's likely another top 3 pick in a stronger draft. Westbrook is like taking Smart's athleticism and Isaiah's playmaking and morphing them into one player. I think OKC would need both to rent Westbrook to us this year.

Westbrook/Bradley/Crowder/Horford/Johnson is a pretty tasty starting five. That team can make a run. And you'd still have Rozier, Brown, Mickey, Olynyk, and 2017 BK pick to build around. That's nice.

Westbrook/Bradley/Crowder/Horford/Amir and then your bench is Rozier/Olynyk/Jerebko and hope Hunter or Young becomes a professional basketball player. Supplement with ring chasing vets as needed over next couple summers and try to get a ring. And get ready for the Yabu invasion of 2017.

David McCracken: The Celtics don’t need Westbrook. He’s a great player, no doubt about it. But why mortgage the future of this roster and its assets for a temperamental player with bad shot selection and an eye on his impending free agency?

I completely understand that if he agrees to sign an extension to stay with Boston if a trade were to happen, that’s great. But how much would we have to give up for his services? Both Brooklyn picks plus Jaylen Brown, Marcus Smart, Jae Crowder and Amir Johnson? That’s a lot to give up and if I’m being honest, Boston gets fleeced in that deal.

This predicament reminds me a lot of the Kevin Love trade that sent Andrew Wiggins packing his bags to Minnesota. Minnesota got a lot in return for Love and OKC will surely be looking for the same kind of deal. But is Boston as desperate as the Cavs were two years ago? Ainge has enough assets and young players right now that if OKC came calling, he should be the one with all the leverage, similar to how he fleeced Billy King who felt the pressure to win now. OKC don’t want to fade into the abyss that is the bottom of the Western Conference and appear desperate to get something in return for Westbrook. But why give them what they want?

Either fleece the Thunder in a trade by keeping your future picks intact or wait until next summer to bring Westbrook in for a meeting during free agency. After all, who else can offer Westbrook a max deal next summer while contending for a title?