It Takes Some Balls to Shoot THAT Many Threes!! 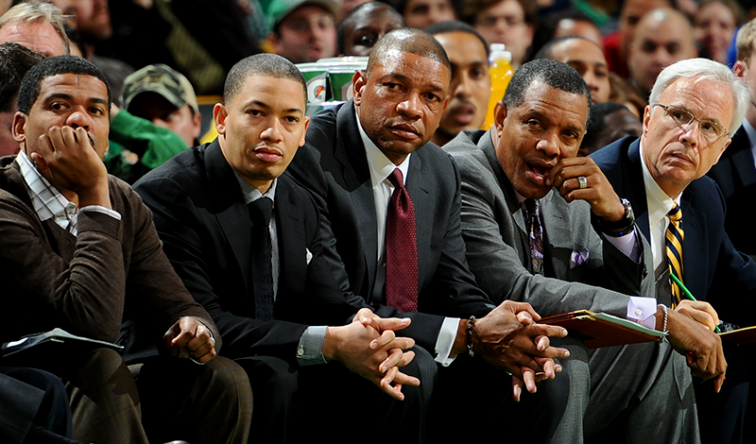 The watershed moment arrived a little over two years ago, back in late April of 2014. No one really noticed.

At the time, the media’s attention was riveted on novice Commissioner Adam Silver’s handling of the Donald Sterling matter.

At the time, only the snarkiest of sabermetricians dared dispute the claims of a Charles Barkley that a jump-shooting team would never capture an NBA championship.

So there was nothing special about an opening-round Game 4 between Mark Jackson’s Warriors and Doc Rivers’s Clippers – filler for the TV networks between a team quite prone to implosion and another whose soon-to-be ex-coach (too?) arrogantly boasts a “best ever” backcourt.

Neither was it a particularly compelling affair. The home-standing, sixth-seeded Warriors, in need of a victory to even the series, seized control of things during one six-possession, 127-second stretch of the opening quarter. At 8:08, Steph Curry hit a three-ball; at 6:01, Klay Thompson hit one of his own. In between, the back-to-back MVP-to-be drained two more treys and was fouled attempting another, missing one of his freebies; and KT knocked down a mid-range J.

Except … there was something unique about this game! Consider these numbers. During that first-quarter flurry, the scoring pace orchestrated by the Splash Brothers was off the charts – 16 points in that time would be over 90 points per quarter. Phenomenal, but hardly sustainable.

Nonetheless, the allure of such a game-changing pot o’ gold keeps teams shooting from Over the Rainbow in greater and greater quantity. Indeed, the Clips and Dubs became the 45th and 46th teams to check in at 40% or better in three-point usage rate (or 3Par, as the good folk at basketball-reference classify it) in an NBA playoff game, dating back to the ’97 postseason.

But this was a playoff first – and only the sixth time ever – a game in which both teams hit 40% in three-point usage. (In the 2015 Conference Final, the Dubs and Rockets matched this feat – ironically in Houston’s lone victory.)

Since that fateful Sunday night at Oracle Arena, the total of these team playoff performances of 40+% in trey attempts has nearly doubled to 84 – 25 times in this past postseason alone.

It would be remiss not to acknowledge the contribution of Mike Budenholzer’s Atlanta Hawks to the current NBA explosion of ICBM’s. In that very same 2014 opening round, while falling in seven games to Indiana, the Hawks took 230 treys among their 551 total FG attempts – a 3Par of 41.7% for the series.

This year’s playoffs produced three such series, most notably Golden State’s through-the-roof 43.4% for the Finals – the Kerr Krew’s usage reached 40% in all but their victorious Game 1. And Cleveland was Trey-Crazy in opening round sweeps, a combined 42.8% for the eight games (of which five were 40+%).

Atlanta’s 2014 “Forty Series,” however, was not a first. That distinction goes to a pre-Splashed, Don (who else?) Nelson-coached incarnation of the Golden State Warriors seven seasons prior in a second-round loss to Utah.

The NBA Playoffs first bore witness to a 40+% game in late April of 1997, courtesy of a Phoenix Sun squad coached by – ya ready for this? – Danny Ainge. The fourth such effort was fashioned just six weeks later in the Finals by MJ’s Bulls.  Until Nellie’s crew came along, there were only six more playoff “40’s” (including the Celtics’ sole entry to this ledger, circa 2002). 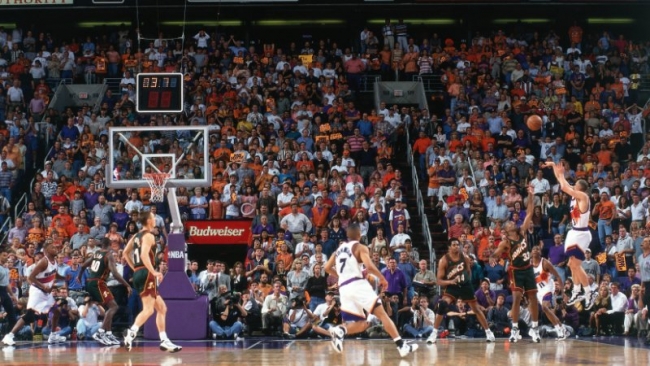 But the pace has quickened and the pool of participants widened ever since – six different teams this postseason, the most ever. In all, 18 teams – fully 60% of the Association – have at least one 40+% game on its resume. Golden State (20) and Cleveland (12) have been the most willing participants … and over the past two playoff seasons, the back-to-back Finalists sport a collective 16-9 record in these shootouts.

But all that glitters is not gold. Like that 90 point-per-quarter scoring pace, that .640 winning percentage is hardly the norm for this style of play.

Is 82 Games a Suitable Sample Size?

Ironically, exactly 82 NBA playoff games have featured a team eclipsing 40% for threes. (Weird, huh?)  Nearly half, 38 games, have occurred in the first round; 20 in Round 2; and an even dozen each in the Conference and league Finals.  Extracting the two games in which both sides hit the mark, we’re left with 80 games.

Just six franchises can boast a winning record when playing this brand of three-ball, and half of them – the Suns, Pacers and Thunder – have each played three or fewer such games. And the Cavs (7-5) and Dubs (11-9) settle in a notch above .500.

Now, these Warriors are the only team to earn a Finals victory while posting a 40+% game – their 2015 close-out Game 6 along with Games 2 & 4 this season. Oddly, until facing elimination against OKC, the Splash Bros. et al had never played more than one 40+% game in any series.

Coach Lue got his James Gang to buy into the three-ball during the regular season’s final six weeks, when his squad’s 39.4% for those 23 games topped the league. In Game 2 of the Conference Semis, Cleveland became only the second playoff team ever to surpass 50% (45 treys out of 87 FGA’s) in usage. But the Cavs lost two of three 40+% games in the Toronto series – including another “50” in which they managed to score but 85 points – and posted a usage rate below 30% for the Finals. (Hmmm!!)

During their second-round rout of Coach B’s Hawks, I couldn’t help but wonder if Houston GM Daryl Morey was supplying the Cavs some surreptitious tactical advice. For some extended stretches of play, it sure seemed as if all Cleveland’s shots were from behind the arc or within the restricted area.

And is that not the numerically optimal way to execute one’s offense in today’s game?

There is, however, a much better target for emulation – a team with only one loss in nine 40+% games over two postseasons, seven wins in eight tries during a 2010 run to  the Conference Final. 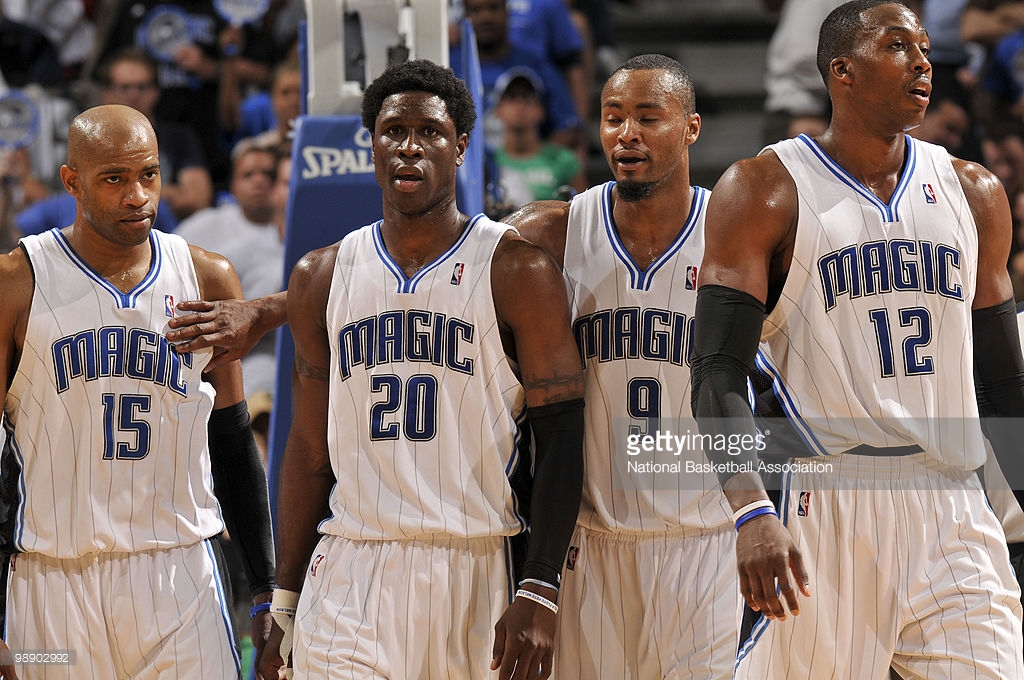 Along with the impressive .889 winning percentage in 40+% playoff games, these Magic Men became the first team to win a 40-Series. Also for the first time in playoff competition – and only the fifth time ever – SVG’s motley crew surpassed 50% (37 treys out of 65 FGA’s) in long-balling while finishing off a second-round sweep of Atlanta. That .569 3Par stood as the highest ever until surpassed last December by the Cavs.

And until the 2015 postseason, these Floridians were the only team to win a 40+% game beyond the second round of the playoffs. In Game 4 of the 2009 ECF against the LBJ Cavs Ver.1, the Magic launched 38 treys among their 80 shots while eking out a two-point win and putting Mr. James into a 3-1 hole out of which he was not yet equipped to climb.

You know who had a front row seat that night in Orlando … a guy who had a slightly better view of the game back on that 2014 night in Oracle Arena where we started this whole discussion?