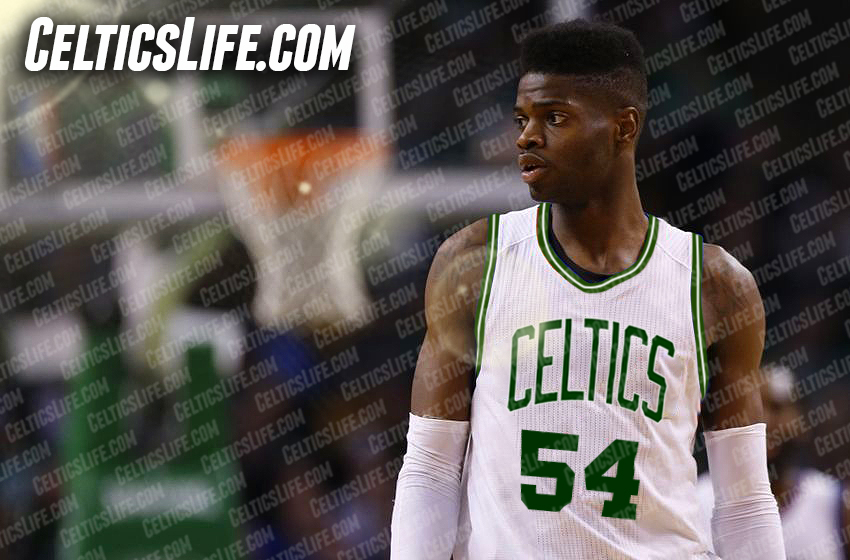 The NBA draft on June 23 is now less than a month away so trade rumors should start filtering in at a quicker pace.

Those rumors will likely have a healthy dose of Boston mentions since the team has a total of eight picks in the first and second round including the No. 3 overall pick and plenty of young players already on the roster who may interest other teams. Another team that will get plenty of attention is the Philadelphia 76ers. The 76ers are in relatively the same position with three first round picks and several young players to deal.

According to Marc Stein and Chad Ford over at ESPN, Philadelphia is considering trading away Nerlens Noel and Jahlil Okafor.

The Philadelphia 76ers will explore trading Jahlil Okafor and Nerlens Noel in the buildup to the NBA draft on June 23, according to league sources.

Sources told ESPN that the Sixers are determined to gauge the trade market for both Okafor and Noel and are increasingly likely to move at least one of them in conjunction with the draft, in which Philadelphia holds the No. 1 overall selection for the first time since selecting Allen Iverson in 1996.

In recent weeks, rival executives have been forecasting Philadelphia to be one of the most active teams this offseason in terms of pursuing trades, with new personnel boss Bryan Colangelo known to be aggressive and openly determined to speed Philadelphia's return to playoff contention.

Boston fans have been drooling over Noel's rim protection since before he was drafted in 2013. Danny Ainge also reportedly tried to trade for him at last year's draft. Though the article says Okafor is the more likely big to be moved, that the Sixers are willing to even discuss Noel is promising.

Boston and Philadelphia are in a great place to make a trade with each other. With Isiah Thomas, Avery Bradley, Marcus Smart, Terry Rozier, RJ Hunter and James Young on the roster, there is a clear logjam at the guard spots. It also doesn't help that most of the top prospects for the No. 3 pick, outside of Dragan Bender, are guards.

Philadelphia also has too many bigs with Noel, Okafor, Joel Embiid, Dario Saric and the likely selection of Ben Simmons with the No. 1 pick. Much to my dismay, it was very clear this past season that Noel and Okafor can't be effective together. Throwing the three other bigs into that mix could show which tandem is the better fit.

Boston has guards but needs bigs. Philadelphia has bigs but needs guards. Both teams are in a spot where they essentially need to make a deal. It's about as perfect of a match for a trade partner that you'll get.

Noel's shot blocking, passing and rebounding would all be useful in Boston. He can also run the floor which fits right into Brad Stevens' system.

So with any trade, it all comes down to cost. What would the Sixers be willing to take for Noel? The package would have to start with the No. 3 pick where the Sixers could take anyone from the trio of Jamal Murray, Kris Dunn or Buddy Heild. After that it gets murky. Would the Sixers want another draft pick or two in next month's draft considering they'd already have four firsts, including No. 1 and No. 3? Would they want future picks and would Ainge be willing to throw in another Brooklyn first for Noel? That's quite the price to pay for a guy who likely won't ever be an All-Star even if he fills a void.

As for players, Rozier, Hunter and Young could be had with Rozier looking like the best of the bunch after a very good rookie season considering all the guys getting minutes ahead of him and a strong showing in the playoffs.

The player that this deal likely hinges on, however, is Bradley. The recently anointed All-Defensive first team guard is on a great contract that runs through 2018 and has shown that he's more than just a defender with his improving jumper. Trading Bradley, Rozier and the No. 3 pick for Noel and Robert Covington seems like a deal that could go down next month. If Ainge decides that price is too steep, he can simply elect to grab Bender or any of the other prospects with the pick and look for trades elsewhere.

It's also important to note that Noel will be coming off of his rookie contract at the end of next season so he'll be in line for a big pay day as the salary cap is expected to spike again.

With all that said, if the price is right, Ainge needs to roll the dice and bring the Malden native home.