Deadspin throwing some serious love at the Celtics 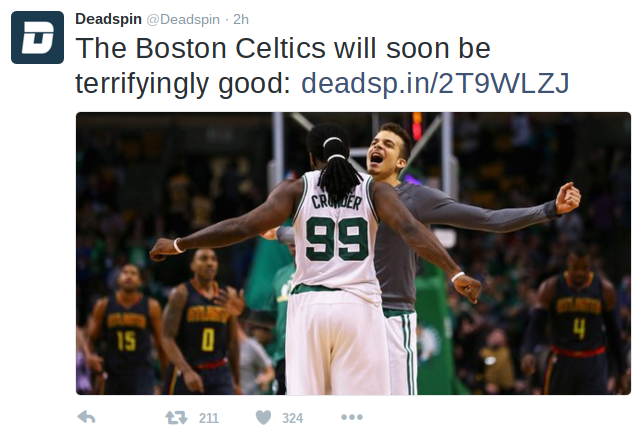 C's fans shouldn't make anything of these quotes other than to file them away under the "fun" category, but fun they certainly are.  Here are a few of the more entertaining excerpts from a Deadspin piece entitled The Boston Celtics Will Soon be Terrifyingly Good, by Kevin Draper:

The Boston Celtics lost to the Atlanta Hawks 104-92 last night, knocking them out of the first round of the playoffs. It’s the last time for the foreseeable future that the Celtics will exit the playoffs so early.

If Kevin Durant is smart, Boston is where he’ll sign, but even if he doesn’t, the Celtics will be in play and be an attractive destination for every major free agent.

If they play their cards right, the Celtics should be the second or third seed in the East next season, and have perhaps the brightest future in the league.

And they probably will play their cards right, because GM Danny Ainge and top lieutenant Mike Zarren have repeatedly proven over the past three seasons (and really, over the past decade) that they’re good at drafting, great at identifying value and signing players (and coaches!) to reasonable contracts, and fucking phenomenal at ripping off the rest of the league in trades.