After season three of the Brad Stevens era ended last night, has progress been made? 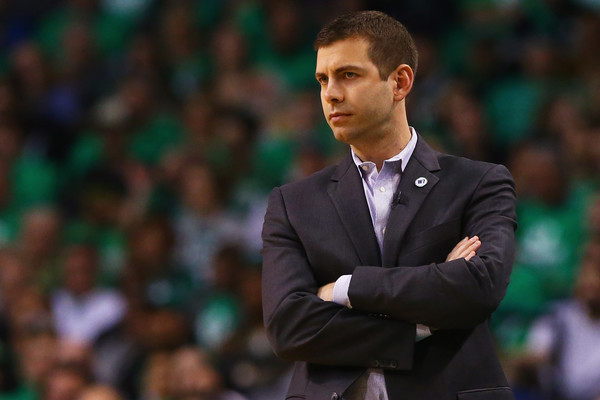 In the press conference following yesterday's season ending 104-92 Game 6 loss to the Atlanta Hawks, Brad Stevens was asked if this season can be seen as a step forward. "Judging by the whole season, yes," Stevens answered.


Brad Stevens on 2015-16: "I feel good about our progress, and we have great opportunities to move forward with our future flexibility."
— Ben Rohrbach (@brohrbach) April 29, 2016

Stevens: "We learned a lot through this playoff series. We've got to get better. That starts with me. We're all gonna be better next time."
— Boston Celtics (@celtics) April 29, 2016


Just about everyone reading this knows the numbers by now. In the three years with Stevens, the Celtics have gone from 25 wins to 50 wins (including postseason) and two playoff appearances. Under Stevens, Isaiah Thomas became an NBA All-Star. Jae Crowder is now a valuable stretch-4 in this league. Evan Turner went from getting DNPs for an Eastern Conference finalists to a core member to a 48-win team.

We can identify those victories in the short term as several franchises that have stayed for years on the league's bottom floor (Sacramento, Phoenix, Minnesota, New York, Philadelphia, Denver) can attest to. But it's widely believe that NBA's purgatory is actually being trapped in the middle between the awful and the elite.

With that said, interestingly enough, the idea of progress has as much, if not more to do with the future than the here and now.

So have the Celtics put themselves in position to continue this trend upward?

Well, part of the question was already answered the moment Boston decided on a rebuild. Moving on from Garnett and Pierce created, unless unforeseen Brooklyn success happens, years of opportunity through the draft.

However, part of this question is out of their control. The Nets trade created this opportunity, but the opportunity is impacted by where a random lottery ball bounces. Over the next three years, it's hard to guess on how many drafts will have the likes of Karl Anthony Towns, Anthony Davis and Andrew Wiggins or the likes of Anthony Bennett, Joel Embiid, and Thomas Robinson. Knowing who's a surefire "can't miss" and who's a bum is hard to predict during the draft or even answer years after they've entered the league.

Maybe Boston tries to strike lighting in a bottle again like they did in 2007 and lure veteran stars to the Celtics.

Some in the media, most notably Felger and Mazz, have believed that the Celtics needed a deep and competitive playoff run in order to get the players in or near their primes to come and play in a place that has a poor record of attracting them, excluding 2007 of course.

But in a league that is no longer about teams centered around a singular star, but rather a collection of talent believing in a system (Warriors, Spurs), maybe Stevens really is their greatest asset. After reading Jackie MacMullan profile piece on Stevens, is it that crazy to think players will come for him?

Yes, the Celtics have made progress in the short term. They've been a pleasant surprise to the area and NBA fans everyone. But the progress is ultimately toward Banner 18.

Has this year and everything since 2013 setup up making steps toward a title? The answers may take a while to figure out, but we begin to find with the 2016 NBA Draft Lottery. Lets sit back and enjoy the ride.