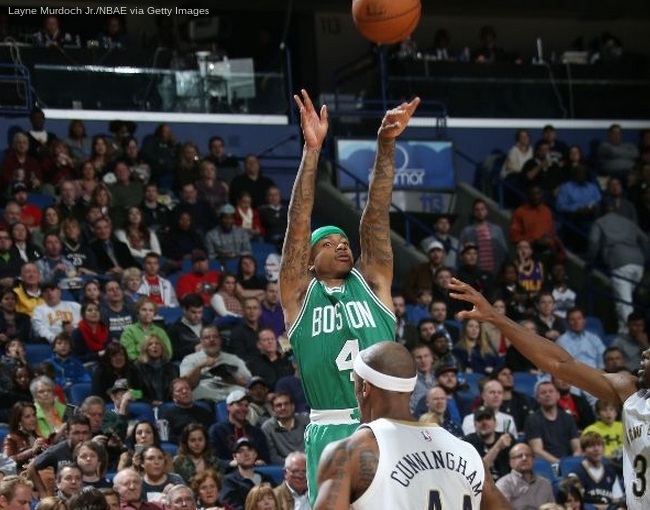 Last night Isaiah Thomas basically won the game for the Celtics over a stretch of two minutes and 37 seconds in the fourth quarter.  Thomas buried three consecutive three-pointers (with a Jonas Jerebko layup mixed in) to turn a slim 71-68 lead into a double-digit advantage, 82-71.  He scored 14 of his 27 points in the final period.


Per Brian Robb of Boston.com, Thomas is averaging 8.7 PPG in the fourth quarter since joining the C's.  For the year, LeBron James leads the NBA with an average of 7.1 fourth-quarter points.


In addition to the above quote, in his postgame interview Thomas said (via Steve Bulpett of the Boston Herald):

I mean, I’m just out there making plays, honestly, and I get a little more aggressive in the fourth. I’m comfortable in the fourth quarter.

It’s not for everybody. It’s different from the first half or the third quarter, especially when it’s a close game. I kind of like that. I like close games. I like being the guy.

Watching Kobe Bryant. Watching all those types of guys. I’m a basketball junkie. All I do is watch basketball. Just watching those guys and seeing how they love that time. They love being that guy and making the big shot, making the big play. And I just want to be one of those guys.


I watched Thomas say this on CSNNE after the game.  As much as I absolutely love what he's done here so far, these quotes made me just the slightest bit uneasy--and not because he's a Celtic saying he wants to be like Kobe Bryant.  I think Thomas' words may give a bit of insight as to why Phoenix was so eager to part with him.  Consider this pregame exchange as well:

Just caught up with Isaiah Thomas, who clearly would like to start. "Hopefully one day that time will come."
— Adam Himmelsbach (@AdamHimmelsbach) March 6, 2015

Isaiah Thomas did say being in at the end of games is more important than starting, and it's been made clear to him that he'll be in at end.
— Adam Himmelsbach (@AdamHimmelsbach) March 7, 2015


It's obviously important to Thomas to be "the man" in crunch time.  And with this Boston team that desperately needed a a go-to guy, he is a perfect match.

But the thing is, he's not Kobe Bryant.  Thomas' "I just want to be one of those guys" line works for now, but what about in the future if the Celtics get good again and have other star players?  Can he really be the top dog on a contending team?  And if not, can he handle it?

I don't want to be raining on the Isaiah Thomas parade.  I'm all-in on him for the time being, and I'm pumped about the direction this season is heading.  But, his words yesterday made me wonder for the first time if he'll be a good long-term fit.  What if he's just a classic "best player on a bad team" type of guy?