Guess who is the hottest team in the Eastern Conference? (Hint: Isaiah Thomas plays for them) 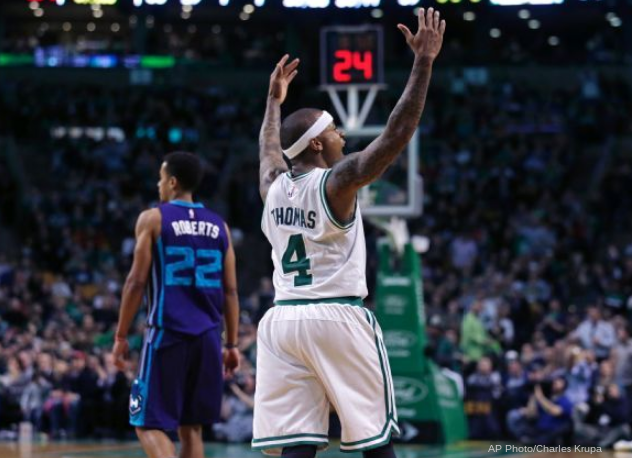 Seriously.  The Celtics have won three games in a row, which as I write this is tied for the conference's longest winning streak (although the Hawks may well get their 4th straight in Miami tonight).  Boston is 7-3 in its last 10, which is currently tied for the East's best 10-game stretch.

And if it weren't for that ridiculous (and since rescinded) double technical that got Isaiah Thomas tossed in L.A., the streak might be four in a row and eight of 10.  The Celtics have also won five consecutive home games, and at 23-33 are now part of a four-way tie in the standings for the No. 8 seed in the playoffs.

Since the acquisition of Thomas the C's offense has been on fire.  Boston has scored over 60 points in a half in each of the last three victories (and also put up 58 in the first half against the Lakers), while also tying its season high for three-pointers in three straight games:


The Celtics have shown a knack for coming back from large deficits all season, but now they're actually winning as well:


It's no surprise that having a go-to guy down the stretch makes a big difference.  Thomas' 4th quarter season scoring average of 6.3 PPG ranks behind only LeBron James (7.0), Dwyane Wade (7.0), Carmelo Anthony (6.5) and Damian Lillard (6.4).

With the Celtics Thomas is averaging 22.3 points and 6.0 assists per game.  He has the ninth-highest scoring average in the league in the past week, despite playing just 27.7 minutes a night.  In that span, only Russell Westbrook (32-for-38) has made or attempted more free throws than Thomas has (31-for-35, 88.6 percent).

Thomas and the Celtics host the NBA-best Golden State Warriors tomorrow night.  Boston is undefeated against conference-leading teams during its recent hot streak.

OK, that last sentence was meant to be funny--but it is also true.