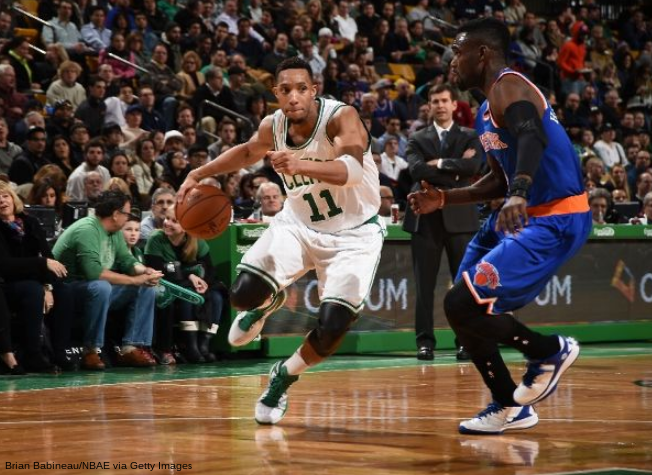 Since the day the Celtics signed him to a two-year contract, I have not been a fan of Evan Turner.  But, I'm willing to admit that I'm beginning to see him in a different light.  I've had this thought lingering in the back of my mind for some time now, and it took center stage when he hit that game-winner vs. the Hawks just before the All-Star break.

Honestly, Turner's first-ever triple-double (10 points, 12 rebounds, 10 assists) against the Knicks last night didn't even surprise me.  I'd been thinking he was due to get one given the way he's been filling up box scores lately.  Over his previous eight games, Turner averaged sneaky-close to triple double numbers: 8.3 points, 7.1 rebounds and 7.4 assists.

I've liked him a lot more since Marcus Smart took over the starting point guard job.  Without the ball in his hands as often Turner is making better use of his time on the floor.  And now that Isaiah Thomas is on board, Turner will no longer be the dreaded "well, I guess he's the best option we've got" when the C's need a crunch-time bucket.  I'm beginning to believe he can be a nice complimentary glue-guy who does all the little things to make everybody else better.

Having said all that, I'm still not completely sold.

I feel like he's never quite in full control of the ball when he's dribbling.  Before his spectacular shot to beat Atlanta, Turner came dangerously close to turning it over on consecutive possessions, which twice triggered Brad Stevens to call a timeout to reset.

If you look closely, you'll notice that on this nice spin move and dish in the lane to a cutting Smart (for his 10th assist yesterday), Turner very nearly lost the handle:

And he's still got "black hole" tendencies as well--as soon as he grabbed this rebound at the end of the first half I was 99 percent certain he wasn't passing:

I guess you have to take the good with the bad.  I'm still skeptical that Turner can be a building block going forward, but for the time being I'm glad to have him around.