Is it time to start Tyler Zeller? 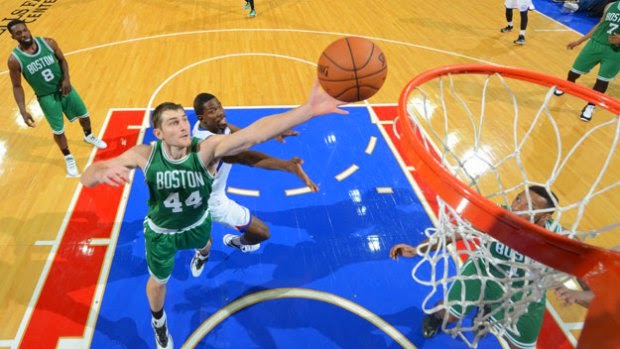 For the first half of my fantasy football season I had a conundrum. Each week I'd debate who to start at my second running back position. Each week it resulted in me deciding to leave the Buffalo Bills' Fred Jackson on my bench, and each week Fred Jackson would outperform who I ended up starting*. Despite consistently outperforming my other plays, I couldn't get myself to start the guy. Because Fred Jackson is, ya know, Fred Jackson. He's consistently effective and productive, but he's also a bit of a bore. There's nothing cool or exciting about playing him.

At least for me, and I'm guessing I'm not alone on this, Tyler Zeller is the NBA's equivalent of Fred Jackson. He won't garner you attention with astounding shot blocking. He won't provide any top 10 dunks. And he doesn't stretch the floor. Each time he enters the game my immediate reaction is 'look at this tall, lanky goofball.'

That is until his play forces me into remember just how good of a player he is, of course.

Through nine games, Tyler Zeller has converted 25 of his 29 field goal attempts. Twenty-five of Twenty Nine! An efficiency that was on full display last night, in a game where he was able to convert 8 of 9 attempts, scoring 17 points in 27 minutes. None of those shots came from distance, and none of them were 'get our of your seat' type of dunks (though the end of 3rd quarter dunk was a pretty great play overall) but they were the result of a smart, tough player who understands where he should be on the court, who's quite excellent at finishing at the rim.

To me, last night's breakout game - or, as I like to call it 'The Boston Z Party' - wasn't just a game that proved Zeller's value, it was a reminder that this is a guy who should be starting every game for this team.

While Zeller's play might not be 'sexy,' what he brings to this team is unique. He's a tough nosed, legitimate 7 foot Center, who has continuously improved each season the defensive end. He might not block many shots, but he's not afraid to bang on the inside, and has quick enough feet to play good defense. He's far from elite, in fact he's probably just about average, but he's significantly better on that side of the ball than Kelly Olynyk.

Offensively? Dude just wants to set solid picks, and roll as hard as he possibly can roll. Seriously, it's not that he's just rolling at the basket, he loves it. And on a nightly basis, we see the benefit. Particularly in his developing chemistry with Rajon Rondo.


This season, he’s largely been Rajon Rondo’s personal pick-and-roll man, and it’s worked for him.

He ended up playing a season-high 27 minutes Monday night, and the way the Suns played defense, Zeller said, it made it easy for the Celtics to deliver passes right in his pocket.


A move to the starting lineup would seem to make a lot of sense for the Celtics. While Kelly Olynyk (up until last night) has been absolutely fantastic, what he brings offensively might be a little too similar to what Jared Sullinger provides, and his defense could certainly benefit from playing alongside Brandon Bass** in the second unit. Zeller brings a different element to the Celtics lineup offensively, and his size could provide a much needed boost to this team's defense.

Regardless, after a few discouraging losses, it's easy to see the silver lining in Tyler Zeller's play. Once you get past how boring it can be.

*Hate you so much, Bishop Sankey
** Quick side note - Poor Brandon Bass. Could a contending team please smarten up, and take him off our hands? This guy is just begging to solidify a team's front court.