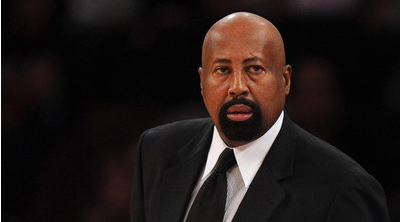 “I have a tremendous amount of respect for Mike Woodson and his entire staff,” Knicks president Phil Jackson said in a statement released by the team.

“The coaches and players on this team had an extremely difficult 2013-14 season, and blame should not be put on one individual. But the time has come for change throughout the franchise as we start the journey to assess and build this team for next season and beyond."

Phil Jackson is burning sage and cleaning house all over New York. Woodson and his entire staff has been let go and Jackson is all but promising sweeping change throughout the organization. Of course the lackluster season can't be completely blamed on Woodson, but he had to go. I mean- c'mon. Who are they going to fire instead, Melo? Is James Dolan going to step down? Is Spike Lee going to start going to Nets games now? It had to be Woodson.

While he is under contract for the 2014-15 season, the search for a new coach will begin immediately. I'd suspect Phil's wheeling and dealing to begin as soon as is humanly possibly as well.