Rajon Rondo had easily his best all around and shooting game today since coming back from injury in the Celtic victory over the woeful Orlando Magic in the only NBA game played on Super Bowl Sunday.

Rondo had 19 points on 9-11 shooting along with 10 assists and six boards.

Rondo's shooting performance comes as no surprise according to head coach Brad Stevens:

Stevens on Rondo's shooting: "He's a very good shooter who's put in time to be a good shooter. Better than his statistics would say." 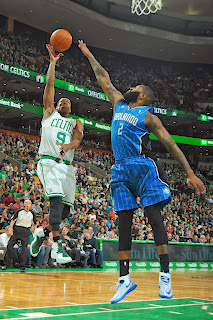 I think anyone who's watched Rondo on a consistent basis the last couple of years would agree that he's become more than an adequate jump shooter from 18 feet in.

Although, his numbers after coming back would indicate otherwise (23 percent from deep) I also think he will get there from three point range.

It's just going to take some time which luckily is something the Celtics have plenty of this season.

He looks comfortable shooting the three ball, nice rotation and nice arc from what I've seen and think by next season he will be shooting at least 35 percent from three.

It's also nice to see the Celtics get the win especially considering the more I watch of college basketball this season the more I think this year's draft class is vastly overrated.

Embiid is a potential game changer, Parker could possibly eventually be a star but no guarantee, Wiggins looks like he will have a productive career and Exum appears as though he could be tremendous but there are still plenty of question marks surrounding him.

To exemplify with Wiggins, if you compare his numbers to Kansas' super Frosh from last season, Ben McLemore, McLemore's stats are vastly superior shooting the basketball and pretty comparable assist and rebounding wise.

Having said that, I said McLemore was the steal of the draft at number 7 and the only player in that draft class who had a shot at being a Hall of Famer (I would have taken Nerlens Noel with the number one pick).

However, he's at least a good three to four years away from potentially becoming a star.

I'm just not sure creating a losing culture in the Boston Celtic locker room is worth the trade off of getting a high pick in this year's highly vaunted draft.

As a result, I would like to see the C's get some wins and for Rondo to continue this kind of production.