Tonight, Ron Adams confronts his former staff for the first time after being ousted by Bulls management. Just months ago, Bulls GM Gar Forman declined to extend the top tier assistant coach's contract. The move surprised many, including Adams. Adams expressed his displeasure to the Chicago Tribune for the first time publicly:

"It's still a bit mystifying to me," Adams said. "And I don't understand it. And if the intent was to be hurtful to me and my family, it succeeded." 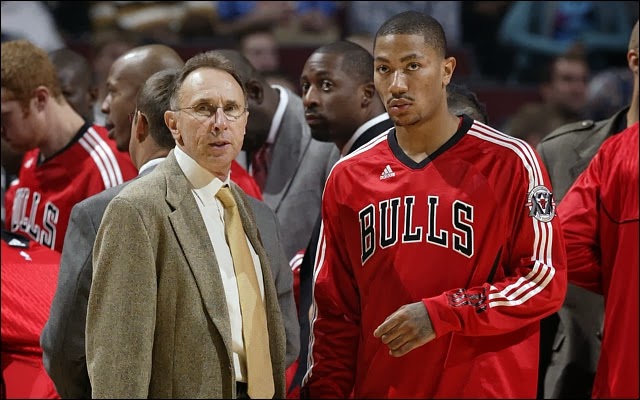 Gar Forman has largely declined to comment on the move, despite speaking in vague generalities in a couple reports:

"When we make a decision like this, it doesn't serve anybody well to go into detail. The decision was made by me because I felt it was best for the Bulls moving forward."

In a league where head coaches typically handle their respective staffs, the move left many speculating as to what kind of relationship head coach Tom Thibodeau and Forman share. Adams had spent a total of 8 seasons with the Bulls before strangely being let go. More from the Chicago Tribune:

Adams had close working relationships with several players, including Derrick Rose. Adams had returned to the Bulls in 2010 after a successful, two-season role as Scott Brooks' lead assistant in Oklahoma City in part to live again with his family, which had remained in the north suburbs after Adams' first Bulls' stint under Scott Skiles.

Despite Adams' familiarity (and surprise) with the Bulls organization, he has been let go before. He has worked with several other teams, including the Spurs, Sixers, Bucks, and Thunder. Regardless, it is reasonable that Adams would be disappointed in a pulled opportunity to work with Rose and an elite roster nearing potential championship aspirations.

After the declination of an extended contract by Bulls management, it was reported late last June that Forman was perturbed by the vocal displeasure of Adams with some personnel moves. Adams echoed this sentiment, noting he was told he "made a disparaging remark about the organization outside the walls of the Berto Center." Adams ultimately affirmed his loyalty to the organization, suggesting his words could not have deserved such extreme action.

Furthermore, in July, Forman reiterated that his decision was not personal. Forman continued to deflect specific questions regarding Adams, who is frequently ranked as one of the league's top assistants in the NBA's annual general managers' polling.

Adams developed a strong camaraderie with Brad Stevens while his daughter attended Butler University. He had only great things to say about the Celts rookie head coach:

"I always thought he was a bright talent who worked more than miracles at Butler. He's a very skilled person who is humble, isn't full of himself and works very well with the players. He treats everyone with great respect and dignity and kindness. His personal traits and combination of skills are outstanding."

Likewise, in an interview with the Boston Globe, Stevens praised Adams' ability to "challenge you to be great." Stevens went on,

He's the first guy to tell you that you did something right, but he's also not afraid to say, 'We need to do this differently or this probably will be tough to do'. It's not easy to be the guy who says that. And I really appreciate that. It's one of the reasons I brought him on."

Hopefully for the Celtics, one team's trash will be another's treasure. Undoubtedly, Adams hopes to defeat his former employers tonight at the United Center.