Bogans is not happy he's sitting the bench 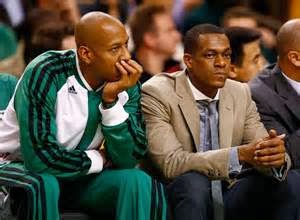 When the Celtics traded Paul Pierce, Kevin Garnett and Jason Terry for Gerald Wallace, Kris Humphries, MarShon Brooks and a slew of draft picks, Boston had to take veteran Keith Bogans in a sign-and-trade for $5 million this year and two more non-guaranteed years at $5 million per.

Conventional wisdom said the 33-year-old Bogans was a throw-in to make the salaries match, since teams usually don't give role players well into their 30s with no real prospects for playing time a pretty sizable pay raise for no reason. The most Bogans had made in a season in his 10-year career had been $2.6 million.

Well, looks like that wisdom failed to reach Bogans, who has played a total of 28 minutes in the four games he's actually come onto the court. From HoopsWorld's Jessica Camerato, who also works for CSNNE:

Bogans was traded to the Celtics from the Brooklyn Nets last summer in the deal that included Paul Pierce and Kevin Garnett. He became part of an already-crowded backcourt with limited opportunities for playing time. The Celtics opened the season with seven guards on their roster, including the injured Rajon Rondo. In spite of the makeup of the team, Bogans thought he would see minutes.

Come on. Really? Bogans must have been the only one surprised by this. The piece goes on to say Bogans did eventually realize he may have a different role than he was accustomed to, but still.

It's great that he wants to earn that $5 million, but it's apparently about more than money for Bogans.

“Money is good, but if you’re not happy doing what you love to do… I want to play basketball,” Bogans said. In response to whether or not he is happy, Bogans continued, “The fact that I’m not playing, no. But put people in my position and see what would happen. It’s easier said than done. So anybody can say yeah I’m happy, I’m getting money, but come on now.”

Unfortunately for Bogans, it doesn't look like he's in line for many more minutes down the road. Barring injuries, the logjam at the guard spots is only going to get worse when Rajon Rondo returns from ACL surgery either at the end of this month or beginning of next. Sure, Brooks was just sent down to the D-League, but he wasn't getting minutes either, hence the move.

When asked about whether Bogans would see more playing time, coach Brad Stevens, you know, the guy directly responsible for who plays and who doesn't, was quoted by Camerato as saying, "I hope so, personally." That pretty much says it all.