Rondo growing as a player on the bench with coach Stevens 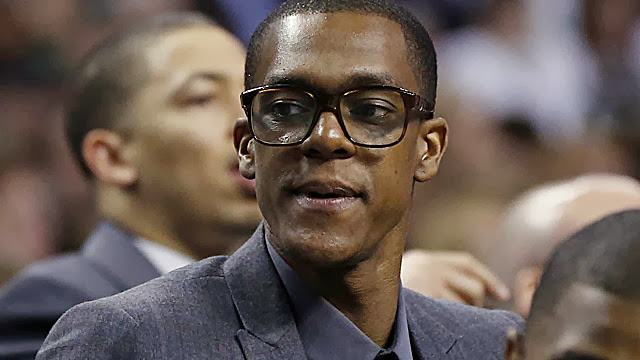 Rondo must feel like he's in another dimension. Stuck in a war in his mind. The ending of his story has gone through a few drafts, but the outline is somewhat clear. Rondo will return this season, at some point. Until he returns Rondo has become of a student of the game. He will find a new meaning to everything that he has done before. I think his bond with Brad Stevens blossomed because of the injury. I'm not saying their relationship wouldn't have been strong if Rondo started in training camp, but Rondo has learned how to coach. He's always been a coach in some ways, but now it seems like he has an understanding.


COACH RONDO LEADS FROM BENCH
Sporting brown corduroys and a navy blue blazer, Rajon Rondo arrived at the bench for Thursday's season-opener looking like the hippest assistant coach in the league. With a basketball-skinned notebook, Rondo sat on the bench offering his usual advice to his teammates (and coach Brad Stevens). Said Stevens' of Rondo's presence, "I think this will be really good for him. It’s kinda like when you redshirt somebody in college and they have to sit out however many games, they get to watch and learn and see it from a different vantage point, so whenever he comes back, he’s going to be better for it. It doesn’t feel like it now for him or us, but if our team can keep fighting like they did [Wednesday], that’s OK. When he gets back, we’ll be better." Rondo likewise gushed about his new coach's first game after the loss (hop HERE for more on that from the Boston Herald).

Rondo should know the offense, and defense from top to bottom, or backwards and forwards. Rondo isn't wired like most point guards in this era, and even most players for that matter. With Chris Paul scoring (42 Points), and Steph Curry scoring (38 points) Thursday night in an epic battle. Rondo must feel eager to comeback. Rondo is the best at what he does. Rondo won't go out and give you 42 points every night or every other night, and maybe not even once a year. Rondo will need to find that extra scoring gear to go along with his reputation of being the best passer and play maker. He's shown that gear before. Rondo went off for 44 points against Miami in game two in the 2012 Eastern Conference Finals. But can he do something like that again? Rondo seems to be making the most out of this situation, and it's a sign of growth from the 27 year-old All-Star.