What the Hell Happened to...Sam Vincent? 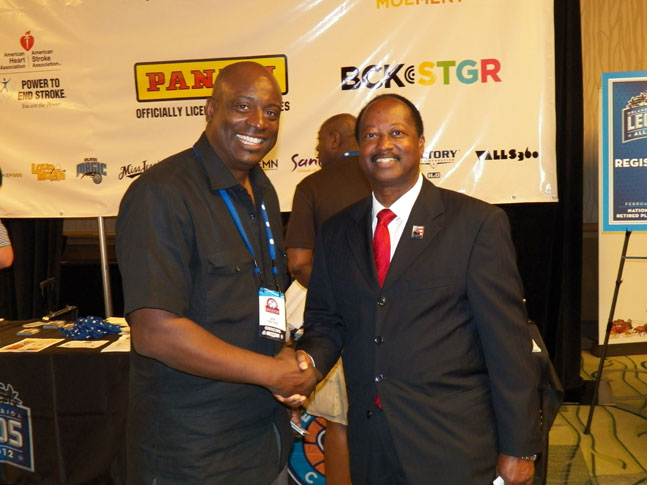 This week in What the Hell Happened to, we remember back on a guy that played for arguably the greatest NBA team of all-time, the 1986 Celtics.  His NBA career was never spectacular and his post-playing career has been filled with more controversy then you might even know.  Did you know Pistons' fans were annoyed when they picked Joe Dumars over this guy?  Did you know he's only one of 4 players to play with both Michael Jordan and Larry Bird?  Then you probably remember Sam Vincent.

Sam attended junior high at Walter French Junior High before heading to Lansing's Eastern High where he won Michigan's inaugural "Mr. Basketball" award in 1981.  Despite trumping Magic Johnson's high school scoring record for points in a game (Sam got 61 vs Magic's 54) and the fact that Sam's older brother Jay Vincent was an NBA player and college teammate of Magic, Sam grew up idolizing Isiah Thomas.  That's actually why he wore #11.  Sam would follow in the footsteps of both Magic and Jay and attend Michigan State (Speaking of Jay- have you seen wthht him?!). 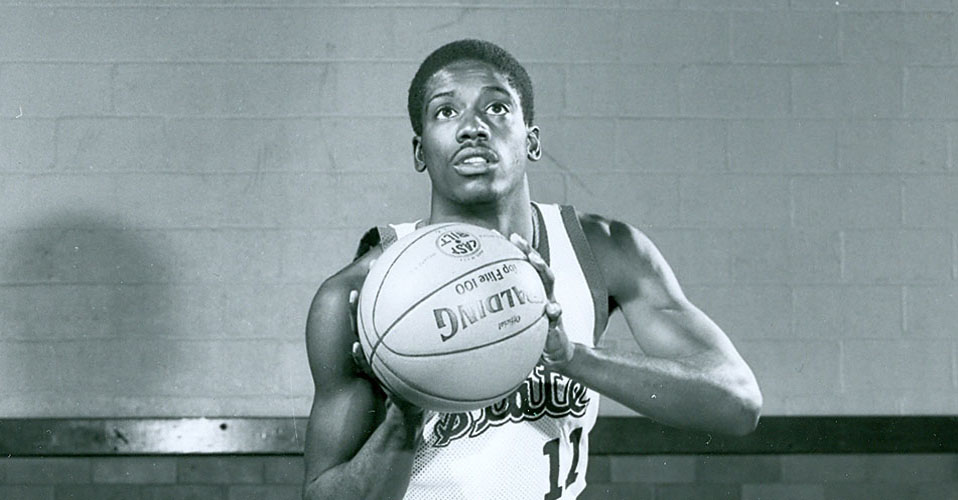 After a successful career at Michigan State, the Celtics picked Vincent in the 1985 draft with the 20th overall selection.  That was two picks behind Joe Dumars who was selected by the Pistons, and apparently, the hometown Detroit fans were not thrilled with Dumars, a relative-unknown from McNeese St.  Terry Porter and AC Green were picked after Vincent.  More on them later.  As for the Dumars' pick:


In the 1985 draft, Jack McCloskey was looking for a long-term partner for Isiah Thomas in his backcourt. Not too many miles west of the Silverdome seemed an obvious solution. Sam Vincent was a local hero, Michigan’s first Mr. Basketball winner in 1981 and a decorated All-American at Michigan State.
When Dallas took Indiana center Uwe Blab with the 17th pick, the way was clear for McCloskey to draft Vincent. At least one prominent person expected him to do exactly that.
But when Trader Jack told Pistons owner Bill Davidson that the pick was going to be a guard from tiny McNeese State instead, and spelled out his name, Mr. D roared, “Who the hell is Joe Dumars?”
Across the street from the Silverdome, at the lounge where they were holding a draft viewing party for fans, the boos cascaded down the M-59 corridor. Joe Dumars was not a popular pick, not with Sam Vincent still on the board.

The Celtics and their fans were pretty stoked at the time.  The thinking then was that Vincent had slipped in the draft (some had him going as high as #11 to Chicago) and going to a strong Celtics' team, he'd help give them the speed and athleticism in the backcourt that they needed behind Dennis Johnson.  It never worked out that way and was rocky from the start:


The first training camp was tough because I had high expectations coming in.  I thought that I would immediately play and get a lot of minutes, and upon getting there I realized the Celtics were loaded with Hall of Fame guys and great players.  Coach [KC] Jones was more of a veteran kind of coach.  So I think that the realization that I wasn’t going to play proved to be a tough adjustment for me at that time.  I don’t think I had the support structure around me to help me understand that being patient, and waiting for my opportunity, would go a long way toward starting in this league.  I was just wrapped up in wanting to play.


But he never carved out a niche or seemed to really belong.  Celticslife writer Cort Reynolds expounds:


He actually had some decent moments guarding Isiah. I remember him playing in the 87 ECF vs detroit and he stole the ball from Thomas at the start of the 4th quarter in game 5 i think, and he was so worried about him coming up from behind him while driving coast to coast that he blew the layup. I always felt Vincent should have been better but he wasnt really a true point guard, he just had to play that spot due to his size. He wasn't really a pass-first point guard. he was a 2 in a 1 body. He could penetrate some but usually looked for his own shot off the drive instead of to pass like most true playmakers.


Before the start of the 87 season, the Celtics would trade Vincent and Scott Wedman to the Sonics for a 1988 second round pick (I suppose Seattle realized not to give Boston an unprotected lottery pick like they did 2 years earlier with Bias).

After just a half-season in Seattle which Vincent described as being "disgruntled" there had been a trade to Milwaukee to the Bucks for John Lucas in 1988 that was nixed by the league (since Vincent's contract would exceed the Bucks' cap).  Instead, he wound up being moved to the Bulls for Sedale Threatt.  Vincent would have his most success with the Bulls and a young Michael Jordan.  But after just 1 year with the Bulls in which he started 56 of 70 games, Sam would get picked by the Magic in the expansion draft of 1990.

Sam would play 3 years with the Magic ending his 7 year NBA career after the 92 season with Orlando.  He finished his playing career in 1994, playing for a professional team in Greece.

It's interesting to think back on Sam Vincent's career in Boston.  Pistons' fans were peeved when they selected Joe Dumars over Vincent in the first round of that 1985 draft.  And remember the Celtics picked Vincent over AC Green and Terry Porter, the latter of whom they'd been strongly considering.  Think of how much could have changed if maybe Dumars falls to the Celtics (and the Pistons pick the homegrown Vincent) or whether the Celtics take AC Green or Terry Porter instead.  Porter was a top-notch guard that was pivotal in the Blazers' success of the early 90s.  Green was the starting forward on the 87 Lakers, a team that beat the Celtics in the Finals.  If the Celtics have Green or Porter (or Dumars), is that enough to get them over the top in 87?  What about 88?  With Porter on board maybe they don't draft Shaw in 88.  With Green on board, maybe they don't move Ainge for Pinckney and Kleine since they have some depth up front.  Any way you cut it of those 4 guys Vincent unfortunately had the most disappointing NBA career.

But was it time and circumstance?  Was his shocking trade from Boston and then being miserable in Seattle what paved the way for his inconsistencies?  He was only human and it could've happened to anyone.  Sam talked more about the Seattle experience:

My experience in Seattle was probably one of the toughest times in my career.  I think I was still pretty disappointed about the (Boston) trade.  I still felt that I didn’t get the opportunity that maybe I should have in Boston.  On the other hand, I also thought the additional playing time that I received in Seattle was great – it was a welcome change – but at the same time, I had trouble getting over the circumstances that put me in a Sonic uniform.  I felt that it affected my development as a player, and it was something that I struggled with the rest of my career. 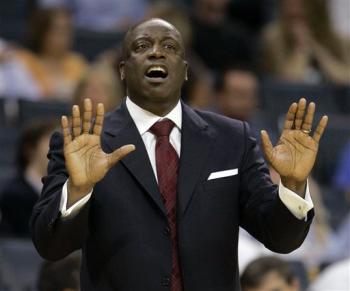 Sam has certainly remained in the public eye and has been very active in coaching.  Since retiring, he's made the coaching rounds in Greece, the Netherlands, the South African team internationally, the Nigerian women's team at the Olympics and the D-League.  After seriously paying his dues, Sam caught his break and became the head coach of the Bobcats under Michael Jordan in 2007.

However Vincent wound up having one of the most controversial short coaching stints in recent NBA history; he was fired after his one and only season, 2008.  And he didn't mince words when talking about his Airness as the owner of the Bobcats:


“The work he put in to be a great player and the work you put in to be a great executive, those are different things,” said Sam Vincent, whom Jordan hired as his head coach in 2007 less than a year after he became minority owner. “That additional time you spend on jump shots, running, dunking, I don’t know if he puts in that same amount of time as an executive or if he even cares to.”

Ouch.  Most people took Vincent's criticism of Jordan to be a knock on Michael the executive, something many have done.  Let's face it MJ's lack of success as an owner of Charlotte is a startling contrast to his dominance as a basketball player.  However is there more to this than meets the eye?  In other words did Sam Vincent have an agenda?  Columnist Rick Bonnell of the Charlotte Observer certainly thought so.  Check it out:
Then to top this off, Bonnell has this very interesting piece of information to share:


Vincent was fired as Bobcats coach in April 2008, after a single 32-50 season. Clearly, he’s still bitter about that because a few weeks ago (sometime in March of 2012) he sent me an unsolicited email full of sarcasm. He claimed my negativity got him fired and that if he still coached the Bobcats, they would be winning 50 games this season.
I’ve covered nine coaches in 24 years on the NBA beat in Charlotte, and Vincent was by far the most self-destructive. He was a rookie at this, but the problems went beyond inexperience.

Remember, Sam retracted his statements on Jordan afterwards so he might deny this took place as well.

What a bizarre story.  I could see Sam obviously being annoyed at losing his head coaching job with the Bobcats.  The NBA head-coaching world is an unfair merry-go-round and for every Jerry Sloan, Greg Poppovich and Doc Rivers, there's an infinite number of guys who never get the chance back.  Did Vincent really email that journalist though?

Since the fiasco with the Bobcats ended, Vincent was named the National Basketball Retired Players Association VP of Membership-Player & Chapter Development in Houston.  He's also coaching the Jamaican National Team this summer in preparation for national FIBA-related events.

Special shout-out to Cort Reynolds for filling in some valuable information on Sam's career.  Definitely check out his epic book on the 87 Celtics, "The Greatest Team That Should Have Been" and the Larry Legend Nostalgia Basketball book, located halfway down the page .