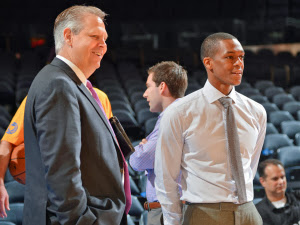 The team's only star remaining, Rajon Rondo, is the subject of much debate.

That debate really only exists in the town of Boston, where some think that Rondo isn't a building block for the future because of inconsistent play and rumors of immaturity. From a national perspective? Rondo is a no brainer star, and thankfully Ainge feels the same way.

In an interview with Toucher and Rich this morning, Danny Ainge was asked which player on the team he wouldn't trade.

“The guy was a starter on the All Star team last year before he got hurt. That means he’s one of the top 10 players in the NBA. He’s still young and maturing all the time. He would be, by far, the most difficult piece to trade.”

Ainge also went off dispelling nearly every trade rumor that his players have been involved in recently. He was pretty adamant about setting the record straight and how some facts get lost in the public after basically several rounds of "telephone".

He did admit trying to trade Rondo for Chris Paul.

Here's some highlights of the interview, as it relates to trade rumors.


“Over the last few years our biggest weakness was scoring in the last six minutes of games. Even with Ray and Paul and KG we couldn’t get over the hump,” he said. “I thought Chris Paul could provide a lot of that. We thought his offense at the time was better than Rondo’s. We’re excited to still have Rajon, and sometimes the best trades are the ones you don’t make.”

On Ray Allen trade to Grizzlies:
Ainge reacted to the rumor that Ray Allen was told he was traded to Memphis and then later told the trade didn't go through.

"That's history being written in a different fashion. That is not true.

Ray was told he was being talked about in a trade, he was not told he was being traded,” said Ainge. “I talk to all the guys when rumors come out and they have questions, I tell them straight out what's going on. Sometimes that can hurt an organization. In that situation I don’t believe it hurt us. We didn’t trade Ray, and then the next summer we offered Ray a no-trade clause.”

On Paul Pierce trade rumors and rumors in general:


Let me just dispel another rumor. There were rumors of Paul Pierce being traded every other day. That's not true. There weren't even rumors of it. We had one conversation with Paul Pierce after the Indiana series in '06-'07.

I don't tell players about those kind of conversations because those aren't trade discussions.