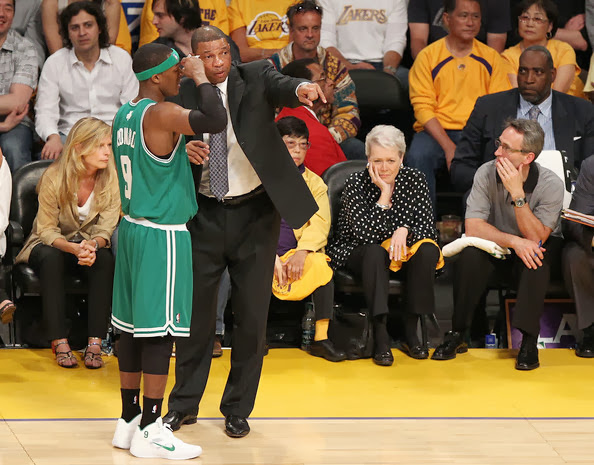 There is a darkness that remains hidden deep down inside the pit of my stomach. Thinking about 2010 brings happiness because of the amazing charge to the Finals that was unexpected, but so much pain remains to this day for me.It’s only silence no sound, in the black that resembles the night.That night is still carved in my mind.

When the final buzzer sounded I was standing there in the dark room with people screaming all around me. It felt like I was def.I could see their mouths moving, and in their bodies reacting to the loss. But everything broke down into slow motion. Once I snapped out of the moment. Reality hit hard. The sting of that loss will forever haunt me as a fan. I can't imagine the sense of loss that a player, or coach feels about a title that got away. Doc Rivers expressed his regret, and heartbreak about losing game seven in 2010.

Perhaps this will change with time, but he still cannot walk into the Staples Center without thinking about the Celtics' Game 7 loss to the Lakers in the 2010 NBA Finals. The Celtics lost center Kendrick Perkins in Game 6, and lost the interior to the Lakers in the final minutes of the series. After the final buzzer, Rivers walked out of public's sight, into the tunnel and the lingering image of the coach remains that man doubled over, like someone had kicked him in the stomach.

Two weeks ago, Rivers had dinner with his old assistant coach, Tom Thibodeau, and they talked for an hour about that series, that game, that lost opportunity for a second title.

"We never mentioned the championship that we did win together," Rivers said. "Not once. That locker room scene was the saddest moment of my basketball life."


The Finals loss is the saddest sports moment in my life as a Celtics fan. Sure, perhaps another banner will take the sting away. But, does the 2008 Championship take away from the 1987 loss to the Lakers? It may for some, but missing out on a championship that you should have probably won,is something you can't get over. As long as I'm still breathing. I will never forget the pain that haunted me, and that still haunts me to this day.