What the Hell Happened to...Frankie Sanders?

Phil (Jackson) is not bright as a coach.  He has a good game plan for the opposition but he can't run games.  The Patroons need a new coach to win the CBA Championship. - Frankie Sanders on his head coach Phil Jackson, while playing for the Albany Patroons of the CBA, November 7th, 1986.


Anytime I see a disparaging quote on Whistling Phil it always stops me in my tracks.  Yes the same Whistling Phil that won 11 NBA titles between 1991-2011.  Frankie Sanders was out of the NBA at the time and was considered "too colorful" by a lot of folks (the image in my mind is someone cut from the same cloth as Marvin Barnes) That is a highly-skilled basketball player who got caught up in the pitfalls of money, including expensive cars and drugs that are hard to resist for a young kid entering the NBA.

Frankie Sanders was born in Dayton Ohio before attending Stivers HS and dominating the basketball world in the early 1970s. He averaged 22 points and an absurd 22 rebounds as a junior. As a senior, he scored 31.6 points a game - the first time a City League player averaged 30 points for a season. He led the Tigers to the state championship game and won All-City, All-State and shared Ohio Co-Player of the Year with Jim Paxson.

Although he was recruited by some pretty big schools, he decided on attending Southern University in Baton Rouge, LA.  Why you wonder?  Because of a new Yellow Cadillac!  Frankie explains:

"By my junior year, I already had an agent, a lawyer from Cincinnati who looked out for a lot of black players back then.  He gave me money, paid my bills, told me everything I liked to hear - how I was gonna be a first round pick in the NBA. Basically, he was my mouthpiece. He put my name out there.  A lot of schools offered something, including money, but with Southern I got that Cadillac."

Despite being far from home and being homesick, Sanders put on a show at Southern.  In three seasons he averaged 26 points and 10 rebounds (it's important to point out Sanders was a mere 6'6 which makes the rebounding numbers all the more impressive).  He scored 60 points vs Dillard University and at the end of his junior year, had eclipsed the 2000 point total.  He decided to declare hardship (this was the term that was originally used when a guy left early from college) and declared for the draft.  The Spurs would pick him in the first round of the 1978 draft with the 20th overall pick.  It wasn't an easy transition for Frankie:

"I might have been ready basketball-wise, but I was nowhere near ready in every other way for the pros.  I had grown up in poverty and I didn't know what it was like to have money. I couldn't handle fame and fortune.  The first thing I did was buy a $40,000 Diamond Jubilee Continental. Me and Moses Malone were the only two players in the league who had 'em. His was copper brown. Mine was metallic blue.  That was the beginning of my down slide.  I started concentrating on all the wrong things instead of my game. I didn't have my priorities straight. Some of the guys on the team - George Gervin, Billy Paultz, Larry Kenon - tried to warn me. They said, `This isn't high school or college ball - this is a business.' They tried to warn me about staying up all night at the disco clubs. I didn't listen. I thought, `Hey, I'm Frankie J.' I had an ego problem. I didn't realize 'til later it was just a way of masking inadequacies. Rather than admit it, I acted out."

In December of 1978, the Spurs waived Sanders during his rookie year.  The Celtics jumped in and signed him in January, initially to fill the void of injuries for Don Chaney and Tiny Archibald.  Why would the Spurs waive their rookie so shortly into their season?  It was a similar problem that faced Barnes and Chris Herren during their time with the Celtics:

"My problem was alcohol.  Drugs, too. Lots of drugs." It was with the Celtics where he said he first got into cocaine, including crack. "I hadn't really been sober since seventh grade," Sanders said. "I had smoked (marijuana), drank alcohol, then took pills. But cocaine was something else." 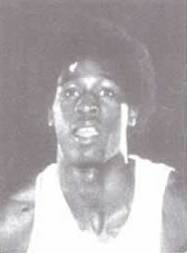 In Frankie's first game as a Celtic he scored 6 points in 8 minutes but was nervous:

I was overpassing because I didn't want to seem like a hog.  But Red (Auerbach) told me to take my shot.


Frankie would play 24 games with the Celtics that year, averaging 6 points and 3 rebounds in about 12 minutes a game.  After the 1979 season the Celtics didn't look to bring him back and he signed on with the Indiana Pacers.  As compensation, the Pacers wound up having to give the Celtics a future 3rd round pick.  He never made it out of the Pacers' training camp and was cut.  After taking off a season, he signed on with the Kansas City Kings,  a season where they made it to within one game of the Western Conference Finals (behind the brilliance of Scott Wedman, amongst others).   Frankie appeared in his 9 playoff games that year for the Kings.  That ended his NBA career.

But Frankie wasn't done playing.  He played in the CBA for the Ohio Mixers and the Albany Patroons (under Whistling Phil).  He also went overseas and had stints with teams in Spain, France and Venezuela, the last being a stop that almost ended him:


It nearly killed me.  It's right next to Colombia, close to Peru. The drugs were all over.


A lot of the legend of Frankie lived from his time in the CBA and the bumping of heads he had with Whistling Phil.  In fact there's this bizarre occurrence that happened between him and Bill Mussellman (the latter's first mention in WTHHT, but certain not the last once we get to Mark Minor).  I leave it to Chuck Miller to elaborate:

"I have friends who eat nails, and they'll be in Albany tonight. So watch it."Those words are an

approximation of a telephone call from Bill Musselman, coach of the Tampa Bay Thrillers, to Frankie J. Sanders, the shooting star of the Albany Patroons.
Both men spent the first two games of the CBA Eastern Division Finals screaming at each other, both on and off the court. By the second game, which Albany won 113-100, both men were given technical fouls for "unsportsmanlike conduct."

On the morning after Game 2, the Patroons were still packing their bags at the Tampa hotel, ready for a quick flight back to Albany. As he was packing, Sanders received a telephone call from Bill Musselman. Immediately after the call, Sanders told Phil Jackson, told his teammates, told Tim Wilkin and Gene Levy of The Times-Union, told anybody who would listen, that Bill Musselman had threatened his life over the telephone. Sanders swore that Musselman had some big friends ready to kill if Sanders continued his scoring barrage.
Musselman claimed all he ever said was to calm down. Sanders swore that Musselman threatened his life. But that night at the armory, Musselman did indeed have some large enforcers in attendance. "He shows up the next day in Albany with two guys," recalled Assistant Coach Charley Rosen. "One guy was an ex-football player with Cincinnati, 300 pound guys with necks two feet thick, monster guys, guys who look like they eat glass. And they just walked around next to Musselman, one on one side, one on the other side, nobody said a word, they didn't say anything. Frankie was like 5 for 20 that game and we lost."


Was Frankie a guy who never lived up to his potential?  A guy like Marvin Barnes who had all the tools but chose the wrong paths?   The always controversial Charley Rosen's list of top underachievers in NBA history included Frankie:


San Antonio's No. 1 draft pick out of Southern University in 1978 had the whole package. He could run, jump and shoot with any of the NBA's elite wings, and he was even capable of playing earnest defense. But Frankie J. (his self-proclaimed middle initial stands for "Jump-shot") was more interested in partying than in buckling down and taking full advantage of his incredible talents. After 69 games with the Spurs, Celtics and Kings, Sanders became a CBA lifer.


Eventually, back injuries forced Frankie to retire from playing and he returned to Dayton.  He struggled with substance addiction for awhile after returning and went to rehab and counseling.  Since playing he's had a lot of different jobs (similar to Jim Ard).  He was a gym teacher and got a job with the parks and recreation department of Dayton, and most recently, was an airport security guard at Dayton International Airport which he loved:


"You look like the old Frankie J people tell me after all those years, I finally found what I was looking for. I found myself."

Although he'll always remember his career:


"I was the best shooter I ever seen," he said with a faint smile, then a shrug. "Hey, that's my ego still talking, but it's true. I was like Clark Kent and Superman. Off the court, I wouldn't hurt a flea, but on the court I was like an assassin, very aggressive. I never thought anybody could stop me."


He still continues to reside in Dayton today and has 3 children, a son Deante Sanders, who was involved in a gang incident in Seattle, and 2 daughters. He was inducted into the Stivers HS Hall of Fame in October of 2007.

Special shoutout to Tom Archdeacon of the Dayton Daily News for his insight on Frankie's career.