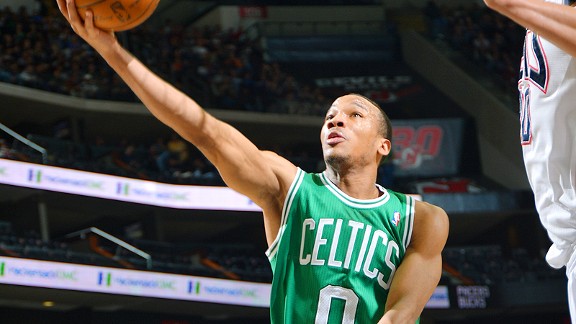 Avery Bradley joined Celtics' broadcaster Cedric Maxwell for a charity event today, where the Celtics presented a family in New Hampshire with a "RE/Max home court remodel" (judging from tweets it appears the family got a furnished basketball court..not sure if they received anything else). At the event, Bradley spoke about a number of things, including his physical shape and his impending free agency. MassLive's Jay King was on hand, thanks to him for the quotes.

Avery Bradley said he's gained a lot of muscle weight this summer, is bulkier and stronger than before.
— Jay King (@ByJayKing) August 27, 2013


Interesting note that Bradley felt he was "breaking down" at the end of the season. He doesn't specify but you'd have to imagine that he's talking about his shoulders, which were both surgically repaired at the end of the 2012 season. A healthy season is key for Bradley as he approaches restricted free agency. AB has proven his defensive dominance, but his offensive game has been wildly inconsistent during his three year career, fluctuating between very good (at the tail end of 2011-12), and well below average (last season).

If Bradley can finally string together a healthy season with starters minutes, it would be huge for both he (contract wise) and the Celtics. Dominant defensive two-gaurds who can produce at least at league average offensively do not grow on trees, and it would be re-assuring for the rebuilding Celtics to know that they have their shooting guard of the future on their hands. It's also important to remember that Bradley is still a few months away from turning 23, so it's reasonable to expect him to improve his game.

Considering his deficiencies as a ball handler, the Celtics are far better off with Bradley at shooting guard, whether or not Rajon Rondo is ready for camp. Bradley's skills on offense are limited to his cutting ability (he averaged 1.15 points-per-possesion on cuts last season) and his still streaky three-point shooting, and he struggles when the offense runs through him (he averaged only 0.55 ppp in isolation last season, and has only averaged 2.5 assists-per-36 minutes in his career). While he's still young enough to make improvements as a distributor, you'd imagine that the Celtics want to put him in a position to succeed. And that means doing the things he does best: defending, cutting, and shooting corner threes. Not running the offense.

One of the things I'm most excited about is watching a healthy Bradley hound opposing guards all season. Few players in the league display his level of defensive intensity, and we've yet to see him healthy for a full season. If that changes this year, expect him to move from 2nd team All-Defense up to 1st.

Avery Bradley hits restricted free agency next summer - how big of a contract is he worth?