The staff at the CelticsSpa office was filled with excitement. As if a week full of news, our desks covered with CelticsLife articles and tidbits on information around the web wasn´t enough to keep you awake on a Monday night, the staff was thrilled by the prospect of a special program coming right after. Our boss and Celtics brain Aless had promised us a fun podcast and it certainly delivered.

We started out the podcast with the debate around the most important news of the week. We could easily establish Jackie MacMullan´s comments on the Celtics as the main event last week: Kevin Garnett is likely coming back to the Celtics for his 19th NBA season in 2013-14. This likely increases the chances of keeping the core of the team intact, including Doc Rivers. We discussed and expressed our joy to be able to have KG in green for another year and stated the logic of keeping the key veteran players of the team for another run. This, as we have mentioned in previous podcasts, would be the wisest decision, even if you just look at the economy of the team. Letting Pierce´s and KG´s deals come to an end in 2014 (Garnett´s last year is partially guaranteed) would free up much salary space to sign free agents next season.

While we were all linking the return of KG to the fate of Paul Pierce in the Celtics next season, the rumor out there is that he may continue regardless of what is next for Paul next season. So, as you can expect the news and potential moves around Pierce´s expiring contract were kept alive by some reports around the web. The main rumors this week came from Houston, where the Rockets are trying to free some salary to be able to sign Dwight Howard this summer. The Celtics -Morey and McHale have been good trade partners with Ainge in the past- have been linked to the list of teams that might be involved in the Robinson sweeptakes. A deal of Robinson and Omer Asik for the captain was spotted in a famous Celtics forum.

In our podcast we expressed our liking for Thomas Robinson´s skills and that despite of his not very succesful start of his career in Sacramento first and then in Houston he could still be a very valuable player in the league. He certainly has the body and the talent. As with Terrence Williams, it may be a matter of finding a good team to make the player evolve and settle in the league. Boston could be a nice team for Robinson.

The temperature in the office kept increasing with excitement as we discussed the rumors coming from a very intriguing city in the Celtics interests this offseason: Utah. The Jazz were the hot name in the Celtics blogs and media this week, as many reports coming from different sources indicated the past and possible future business alliances between them and our Celtics. As you may remember we have discussed in CelticsLife and in our Spanish podcast about the advantages of trying to acquire free agent Al Jefferson, who last played in Utah this season. Jefferson and/or his teammate Millsap were involved in trade discussions between both teams in February. The economics didn't quite fit back then, as the Jazz were trying not to absorb long term contracts in deals and reportedly it wasn't easy to make a trade back then.

The relative surprise came in the same report from MacMullan in which she stated that the Celtics main target is Paul Millsap. In today's program we debate around the fact that while Millsap is a superb complement to any team, we all agree on the fact that adding his teammate Jefferson would be more interesting. For starters, it would allow KG to move back to the PF role for many minutes. Furthermore, Millsap wouldn't make the team gain a significant step into regaining the championship contender pack. We think Paul is an excellent player, but Jefferson would be the one that would make the C's significantly better. Al Jefferson seems as plan B in these two reports, so there are still chances we get Big Al back in Celtics green next year.

The rumor mill has another little tidbits of information kept deep inside forum discussions and you need to take everything with a grain of salt. The other name that has joined the interests of both Jazz and Celtics has been Dennis Schroeder, the German point guard. Schroeder is rumored to have a draft promise from the Celtics while it is well known the interest of the Jazz to acquire him. This, coupled with the rumored common activity between this two teams, makes the potential likeliness of a transaction increase. The Celtics are one of the teams mentioned in possible trades for picks in this month's draft. Jazz own #14 and #21 in the first round and the Celtics could have a promise with Schroeder to trade him with #16 for Utah in a draft night deal. As always, this is probably a little more than speculation, but we discuss the Jazz frenzy in our podcast quite in length.

We also talk about draft and the recent updated mocks. We comment on the rise of Steven Adams, who would be out of reach for the Celtics at #16, and we discuss about the interest in Kentavious Caldwell-Pope, whose shirt -provided he was drafted by Boston- would be purchased instantly by our reporter Álvaro. Our favorite more realistic option for this draft, Jeff Withey, seems a little less likely at this point in time. That could always change though, particularly if the Celtics move down in the draft as it could be possible.

Monday surprised us with a major hit as the hours before Game 7 of the Eastern Conference Finals were coming closer. The player whose name you still try not to mention who currently plays for the Miami Heat was rumored to opt out of his deal (with the Devil) to play for the Celtics next season. In our office we doubt that the rumor is true and certainly none of the workers there want to see that person wearing the Celtics green after what happened last summer. 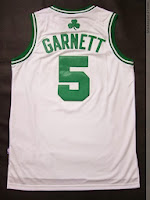 The second part of our podcast is full of humor, entertainment and surprises. As usual we start by answering the questions from our listeners, please feel free to send your questions there. One of the surprises is our contest: you can win a Kevin Garnett jersey. In order to participate you need to send a twit to @celticsSpa stating the reason why you should win that jersey together with a hashtag that is provided during the program. So don´t hesitate any longer and listen to the podcast to find out what it is to be able to get your KG jersey.

Another major surprise and bonus to this special edition of the podcast is the announcement of the new website of Celtics Spa that will be ready in the next days. There you will be able to find the podcast, the latest news, the links to interesting websites (Celtics Life the top one ;) tumblr files and a forum for discussions about the Celtics and other stuff.

At the end the show we also talk about the retirement of two NBA legends: Grant Hill and Jason Kidd, co-awarded Rookie of the year back in 1995. Both have had very long and quite successful careers and we tribute them in our podcast. We finish with our predictions for the last game of the Eastern Conference Finals that was about to be played an hour later. Miami was the favorite but we still gave hope and a lot of credit to Indiana for pushing the Heat to the limit.

To sum up, it is a very entertaining program loaded with Celtics talk, fun, dedications to people who interact with the staff during the week (birthday wishes included) and many other ingredients. There is a funny surprise at the end of the show in which the artistic talents of the staff are tested. Everything is masterfully remastered by magician Ramsés and spiced up with the knowledge of Raico from the Canary Islands.

Jump in and listen to some of the Celtics talk in Spanish and interact with us. You won´t regret it.

(You can listen to the rest of the podcasts here)