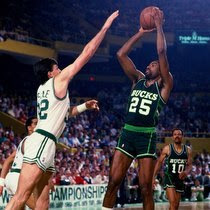 According to Wojo, the Celtics have signed Phil Pressey, son of former Buck's player Paul Pressey.  Paul Pressey was a hell of a player in Milwaukee and helped play Don Nelson's "point forward" role for several years.  Those Bucks teams of the 80s were very, very talented, probably the best team to not win a title in quite some time.

Anyone remember those intense 1980s games at  the Mecca in Milwaukee?  The awesome sweep of the Bucks in the 86 ECF?  Or the grueling 7 game Eastern Conference semifinals from 87?  Sound off below!

****Update****  According to Steve Bulpett they've also signed Mitchell, Abromaitis and Johnson-Odom.  I assume that's 3 guys, but I'm not entirely sure.