R for reloading, not rebuilding 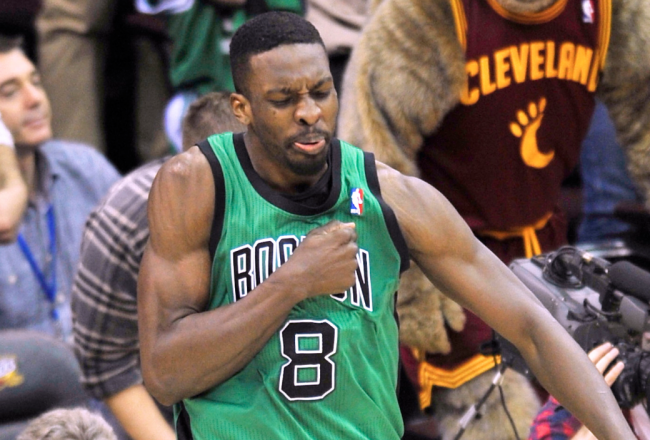 Following the elimination of our Boston Celtics last Friday you may have found your TL in twitter filled with articles of the main reporters out there citing the likeliness of the end of the Garnett era in Boston. That, coupled with the logical sadness after falling to the Knicks may have colored your basketball dreams in black gloom.

First, and before entering into an analysis of what the Celtics may look like next season keep in mind this:

The team has a high quality group of players in Rajon Rondo (NBA superstar), Jeff Green (the best player for the Celtics in the second part of the season), Jared Sullinger (one of the best rookies this year) and Avery Bradley (one of the best perimeter defenders in the league). The prospect of having these four players locked for our roster next season should be enough to make you smile.

But there is more:  the team has also some good players that can contribute to the team either from the bench or in future trades to reload this team this summer. I am referring to Brandon Bass, Courtney Lee and Jason Terry. These three players have 2-3 year contracts ranged between 5-6 million dollars which could make a good solid package in a trade. Gary Washburn thinks the C´s will try and trade Lee or Terry:

Look for Ainge to shop both contracts, hoping to move at least one. Lee has more value to the Celtics as a reserve and may be more difficult to trade because he has three more years left on his deal.

As for the rest of the roster, I believe the team will try to upgrade the likes of Chris Wilcox -completely subpar season-  Jordan Crawford and the China trio of Williams, Randolph and White. I guess they will fight for the last roster spots in Training Camp. As for Fab Melo it is unknown what the team will decide to do with him, but it is clear that he is not NBA ready and the team already tried to unload him in February. 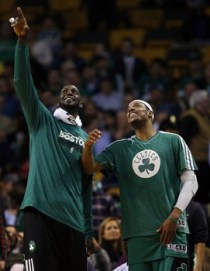 We do have some options to operate with in the market once the decisions on Kevin Garnett and Paul Pierce are taken. This will be the tougher for Danny Ainge, who will likely explore trades for Pierce until draft day as he has been doing in the last year. If there are not good enough offers out there, expect both players to start the year for the Celtics.

And yes, Kevin Garnett will likely be back:

As for Garnett, he appeared exhausted and beleaguered after the season finale but privately gave teammates the impression that he wants to return, especially with Rajon Rondo coming back and a first-round elimination leaving a bad taste.


So with the core of Paul Pierce, Kevin Garnett and the 4 young guns mentioned at the beginning of the article the team can look for ways to reload this summer. 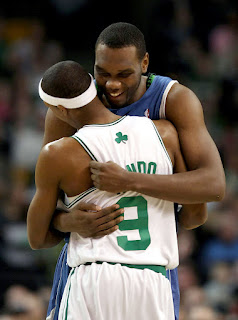 The name everyone is talking about is Al Jefferson. As you know, he will be an unrestricted free agent this summer and word is he would welcome a return to the Celtics. We know his value is much higher of what we can offer, so most likely we would have to work a sign and trade with Utah. It is to be seen what the Jazz would want in return but keep in mind that they have already lost Big Al and at least they could get some young player from us like Lee to help them next year rather than losing him for nothing (remember the Antoine Walker trade to Miami, did we get equal value in return in that trade?) If Big Al wants to come here he has more power to decide here than the Jazz.

Of course, adding Jefferson without touching any of the core players would be enough to elevate Ainge to the realm of NBA magicians in the offices. Can you imagine Big Al and KG as the starting frontcourt next year? We would simply be welcomed in the NBA championship short list of contenders.

Another attractive name will certainly be JJ Hickson, unrestricted free agent who last played for the Blazers. Ainge has tried to trade for him in the past and he would surely be a very good rotation player in Boston. Tiago Splitter and DeJuan Blair from the Spurs could also intrigue Ainge.

The remaining options out there to beef up the frontcourt are more unlikely and dangerous.You should not link the names of Andrew Bynum and the Celtics ever (bad knees, busy night life) and Dwight Howard (way too expensive, way too Un-Celtic). Greg Oden will probably head to Cleveland to try and regenerate his career and other bigs such as Chris Kaman may not be the best fit.

Think Kendrick Perkins if he is amnestied by the Thunder. Remember, Ainge has always liked Perk...he just didn´t want to pay big bucks for him. He would sign for the minimum as he would still have the salary from Oklahoma.

I would love the Celtics to try trade possibilities with the Kings (Cousins) and the Suns (Gortat) but the chances are not too high considering the lack of stability and the storm in which their offices are in right now.

And hopefully the team should also try to sign a back up PG, a problem this team has had in the last seasons. The team should try and get a pass first guy, such as FA José Calderón whom we tried hard to acquire at the trade deadline. If Calderón´s asking price is too high we can set our goals in Luke Ridnour, who has one year remaining in his contract of  $4 million. The Wolves are packed at the PG position and may be interested in one of our young players (Lee?) or in acquiring some veteran help (Terry?).

In any case, Ainge will work hard to make this team a threat next year. He has always been very active and clever to operate with hands tied by the new CBA and salary cap limitations. This offseason won´t be a difference.

So in this dark times in which we have said goodbye to the 2012-13 season you will be soon presented with the frenzy of the preparation for the following one.

Did I mention the NBA draft? Did we forget we have the 16th pick? 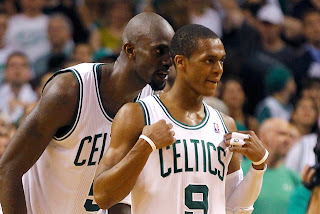 Good times are ahead of us, Celtics fans. Have patience. The Boston Celtics will be back stronger than ever next year.

Most likely with Garnett and Pierce.

And hopefully with another big names that will make the Celtics a better team next season.