Breaking down the Celtics salary cap situation, and why an Al Jefferson return is possible

The NBA salary cap is weird. There's a salary cap, a luxury tax, different rules for spending money on your own players compared to other team's players, mid-level exceptions for team over the cap, mini-mid levels for teams over the tax, Larry Bird rights, ect. If you don't understand it all—I don't blame you.

However, despite all of intricacies of the cap, the Celtics situation appears to be pretty straightforward on the surface. According to HoopsHype, the Celtics have $73.1 million in salaries committed for the 2013-14 season. Take a look. 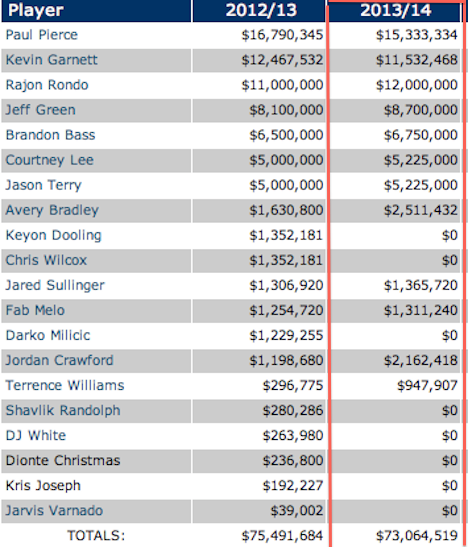 The NBA salary cap is projected to be right around $60 million next year, meaning that the Celtics are just about $13 million over heading into the off-season (you can go over the cap to re-sign your own players, which the Celtics did last off-season with Garnett, Bass and Green). However this is assuming the status quo, meaning; A. Paul Pierce's $15.3 million dollar option is picked up, and, B. Kevin Garnett decides to return. This is the first situation we will look at.

A. The Status Quo (Pierce is retained, KG returns)

If this happens, the Celtics are basically stuck with the roster they have. The one move the team could make would be the mid-level exception, but they may not even be eligible to use the whole MLE.

The way the MLE works is that teams over the cap but under the luxury tax can offer a 4 year, $21.5 million dollar deal to players. However if you are over the tax you can only offer the 'mini mid level' which is 3 years, $9 million (otherwise known as the Ray Allen deal). As of right now it appears that the Celts will be over the tax, which this year was at $70.37 million and is expected to raise "only slightly". Therefore if Pierce and KG both come back, get used to the roster we saw this season. While many Celtics fans may be happy to see the legends return, it would delay a potential rebuild by another season.

If Danny does decide to part ways with Pierce, he has three options; 1. Trade him (possible but unlikely), 2. Amnesty him (we'll get to this), or, 3. Decline his option. We'll start with the latter.

If Pierce's option is declined the Celtics need to pay him a $5 million buyout which does count against the cap. This lowers their cap number from $73.1 million down to $62.8 million. With the cap right around $60 million, simply declining Pierce's option doesn't accomplish much on it's own. The one thing it would accomplish would be allowing the Celtics to use the full MLE to entice a better caliber player to come to Boston. However, is the difference between the Mid-Level and the mini-mid-level really worth losing Pierce? I say no.

I didn't include this as an option, as I think it's very unrealistic, but you could also lump "Pierce's option is picked up, Garnett retires" into this section. In both scenarios the Celtics would have one of their two
Hall of Famers, and would have cleared enough money to stay clear of the tax, but not enough to make a major move (With Pierce here and Garnett's $11.5 million salary off the books the C's would have $61.6 million committed next year).

Now is where things get emotional. Could Danny Ainge really pull the trigger and amnesty Pierce this summer? If the Celts really want to rebuild, amnestying Pierce is the option that makes the most sense as it gives them the maximum amount of salary relief. By taking the entire cap hit off the books, the C's would be down to $57.8 million committed for next year. Obviously $2 million isn't enough cap space to make any kind of major move, but the shakeup would also send a strong message to Kevin Garnett who said recently that Pierce would have a big impact on his decision to return. If #34 was no longer in the picture you have to imagine that Garnett would think long and hard about returning to the team. Which leads us to our final realistic possibility.

So far none of the options have created any kind of real cap space for Boston next season, as the team just has too much money on the books for one departure to make a difference. However if Pierce is amnestied, and KG decides to hang them up, well that's an entirely different situation.

Starting with the current money on the books ($73.1 million) and subtracting $15.3 for Pierce and $11.5 for Garnett, the Celtics would suddenly be down to just $46.3 in commitments for next season. While this would not leave quite enough room for a max-level player, it would allow the C's to bring in an elite talent to join the suddenly young core of Rajon Rondo, Avery Bradley, Jeff Green and Jared Sullinger.

I wrote an article about a month ago describing what I would do if the C's are put in this exact situation, and basically I could think of one name that fits into the 'elite but non-max level' player category that would be interested in Boston: Al Jefferson.

Big Al is 28 years old and coming off a season in which he averaged 17.8 points and 9.2 rebounds per game for the Utah Jazz, his sixth consecutive season averaging at least 17 and 9.

Jefferson isn't perfect—he's below average defensively and he did suffer a serious knee injury four years ago—but considering Boston's lack of appeal to free agents, and Jefferson's reported interest in a return to the city, he's by far the most logical choice.

With Jefferson (or a similar level player) in the mix, Boston would again be pushed up to the salary cap, but could still offer the full Mid-level, something that could bring a pretty good player into Boston.

I took a look at the list of free agents and concluded that Al-Farouq Aminu would be the best option. There are a ton of options for players that will earn about $5 million next year but I love Aminu's rebounding (he grabbed 26.2% of all available defensive rebounds while on the floor this year, best among small forwards), his defensive ability and how it would give the team a completely different player than Green to back him up.

Again there are a million different directions the Celts could go this summer. But if the team is serious about turning towards the future, they could get a huge head start by saying goodbye to two of the greatest players in franchise history.

It certainly won't be easy, but change rarely is.