Kevin Garnett in a walking boot after last night, Danny Ainge says it's for 'precautionary reasons' 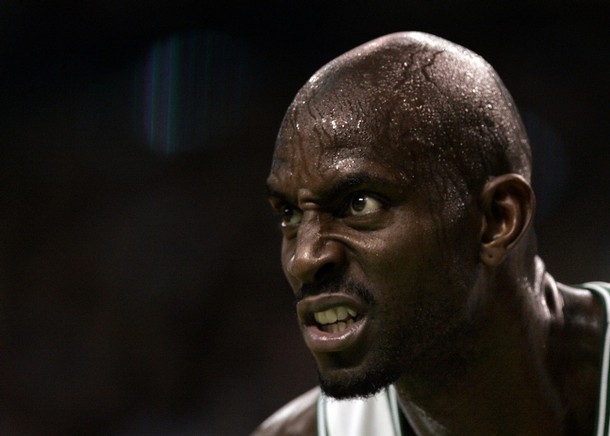 With barely a week to go before the playoffs start—that's not good.

Today Celtics President of Basketball Operations Danny Ainge made his weekly appearance on WEEI's "Salk and Holley" this afternoon and addressed the boot.

Well, you know, so first of all, there’s no such thing as 100 percent for anybody, right now,” Ainge said. “But KG, you can see how well he’s moving on the court. Last night, he didn’t have one of his better games on the court, but he was moving very well. You could see him defense laterally and he was rebounding and he was very active. The walking boot is just precautionary. It’s just … some guys keep ice on their legs after every game — sometimes, their legs are sore, sometimes, they’re not. They do it as a precautionary thing.

The walking boot … he has some inflammation in his foot, so every time he stops playing, he has the walking boot on. He doesn’t wear it all the time, but he just wears it after games to make sure his foot isn’t moving any more than it needs to. So it’s just precautionary right now.


Precautionary or not, this is not exactly comforting news for the Celts. Interestingly enough, Duke forward Ryan Kelly was spotted in a walking boot before every tournament game the Blue Devils played, leading many to believe he had re-injured his broken foot. However Kelly didn't miss a game, appearing in all four of Duke's NCAA tournament games.

So while we shouldn't rush to assume the worst case scenario, KG is dealing with bone spurs—an injury that often times requires surgery, and is nearly 37 years old—meaning this injury is more than likely something that will stick with him throughout the C's playoff run.

Not exactly what the doctor ordered for an already paper-thin Celtics roster as a 1st round match-up with the red hot Knicks approaches.