The Nets' Joe Johnson reflects on his brief tenure in Boston 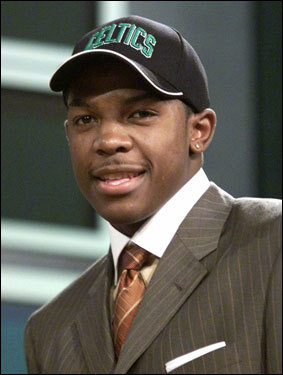 Brooklyn Nets guard Joe Johnson has some fond memories of his brief career in Boston.

Johnson was drafted 10th overall by the Celtics in 2001 and dealt to the Suns later that season in a five-player deal.

He took time after the game Wednesday to reflect on his brief stay. Johnson spoke to CSNNE's Jessica Camerato.

It was brief, but every time I walk in this arena I've got a vivid imagination about how I used to walk through this tunnel and the locker room was right over there," he told CSNNE.com. "It's nothing like going back to Phoenix or Atlanta, but don't get me wrong, me playing my short time here in Boston was a great one."

Johnson is still confused as to why he was traded after starting 33 games in Boston. He said he didn't see the trade coming and thought he was playing well. According to Basketball Reference, Johnson averaged 6.3 ppg, 2.9 rpg and 1.5 apg in almost 21 minutes in Boston.

His favorite memory was facing off against the greatest of all time, albeit a little past his prime.

My favorite memory was, I'll never forget, we played the (Washington) Wizards my rookie year. This was the first year Michael Jordan came back," he said. "Coach (Jim) O'Brien was like, 'Joe, you've got to guard Michael Jordan tonight.' That's still the highlight of my career, getting a chance to play against him. It was unbelievable. I've still got a tape to this day. I did pretty good. I held my own, I did alright."

Johnson has certainly been a capable player during his career. He averged over 20 ppg in his first five years in Atlanta.

Even though the Celtics didn't get anything more than role players in the Johnson deal, Boston is better off because of the trade.

Johnson has always been one of those tweeners. He puts up superstar numbers, but it's hard to consider him a superstar. Sure, he's a six-time All-Star, but he signed an absolutely atrocious six year $119 million contract with Atlanta in 2010. It's not often you say a superstar is overpaid.

He's just not a winner. His closest shot at a championship was with Phoenix in 2004-05 when the team made it to the Western Conference Finals. Johnson was the fourth best player on that squad, behind Steve Nash, Amare Stoudemire and Shawn Marion.

In Atlanta, Johnson, Josh Smith and company were notorious for their first-round exits. It could have been different in Boston, but the guy just doesn't seem to have that killer instinct when it matters and completely disappears some games.

It's nice he has fond memories of Boston, but all he would have left fans with is a headache.