At least Jeff Green is "fine"

Things got pretty crazy last night. The undermanned Celtics took on the fully stocked Heat and lost and Kobe Bryant tore his achilles and is done for the year. Lost in the shuffle was Jeff Green and his elbow injury! 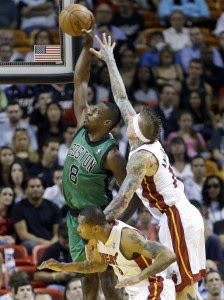 Turns out he's going to be A OK.

Jeff Green was injured after falling on his elbow after a dunk, he later left the game and didn't return. Still, Green brushed it off saying that he is "fine".


“Any time you hit a nerve, it feels numb down the whole arm,” Green said. “And [the feeling] wouldn’t come back as fast as I wanted to, because we were still playing. But I’m fine.”


Doc Rivers chimed in with his normal untrustworthy assessment where he says he doesn't think it's a big deal, but doesn't know and that he'll "probably" play the next game. We've heard that routine for just about every varying degree of injury so I tend to take it with quite a bit of salt. I'd almost rather he give the Bill Belichick type answer.

The Celtics play the Magic tonight in a must win game, we'll certainly have a more definite answer on Green then.