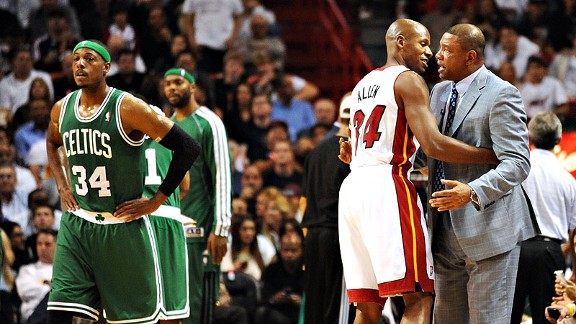 Ray Allen put on a Boston uniform in 2007 and helped raise Banner 17 that very same year. He spent the next four years trying to help his teammates and the city of Boston raise 18, always coming up short. Most of the time that was at the hands of LeBron James and the Miami Heat.

So, this year, when Allen decided to turn down more money from Boston to move to their chief rival in the East? It stung.

We already knew how Kevin Garnett felt about this decision, but now Pierce has weighed in with how it effected him.


“One day when it’s all said and done, I’m sure we’ll talk about it off to the side,” Pierce said when asked if he was capable of forgiving Allen for joining the Celtics’ bitterest conference rival. “But not right now.”

Pierce has this much in common with Celtics fans. He still can’t conceive of Allen’s decision.

“It definitely hurt me,” Pierce said. “Say we play the Lakers for the championship, and two years later I go and sign with the Lakers. That’s the equivalent of what he did.”


At the time, Allen seemed to think that his Uconn ties and five years of service in Boston would soften the blow. It didn't.

There were reports that Allen had friction with emerging star Rajon Rondo which were later confirmed by Doc Rivers. Allen did not gain a larger role, or more money, by leaving for Miami. Still, with the Celtics currently hoping to earn the seventh seed and the Heat looking like the eventual champion, the argument could be made that he made the right decision.

That's not going to make Boston fans or the teammates he went to battle with over the years feel any better about that. Even though Allen is having the least productive season of his career while playing the least amount of minutes, fans will still hold a grudge. Because he went to the Heat, nothing will earn him forgiveness.

That's something Pierce acknowledges in the Herald article. If Allen went to any other team, he said he wouldn't have felt the same.


Ray Allen's place in Celtics history won't really be determined until the years pass. There's no doubt his decision to flee to the team's nemesis has left a stain on his Boston legacy. If he had helped the Celtics to raise not just Banner 17 but 18 and maybe 19, there's no doubt his number would be hanging in the rafters. But only one championship for a franchise that has more than any other? That might not be enough to excuse the betrayal and have his number retired, but then again, I doubt Allen cares.