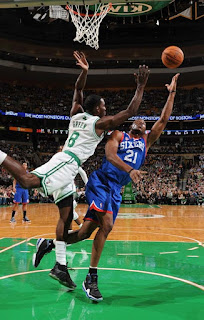 After watching the 76ers game live, I wanted to touch on certain aspects of C's play, however couldn't get the chance yesterday before the game. So I've decided to take a look at my notes and see if anything has changed after the game against the Bucks. This post will be like a reevaluation in retrospect, I think.

Any change?: Well, sorta. Green in Q4 last night felt good for a change. He scored three layups (which is one short of what I expect from him), drew a couple of fouls and gave Celtics some energy. But after the lackluster performance in the first 5 games, we'll need to see more.

76ers game note 2: Terrible effort in 1st half, but the team showed great effort came up with the best defense of the season. Bad news is we still gave up the same amount of points.

In the middle of first quarter, my friend turned to me and said "we're going to lose a lot of hair tonight." He was right. We've known that our defensive rotations were terrible, but what hurt more was the lack of effort. 76ers only had 3 TOs by the end of the first half, which is simply unacceptable. However, with the start of second half, there was sparks of tenacity on the court, which helped the crowd wake up as well. Celtics = effort. It's one thing if the opponent's shots drop, it's another thing if you beg them to make those shots. It wasn't perfect, but it was a good sign.

Any change?: Again, sorta. Against the Bucks, the transition D was better (this was captain's major concern following the 76ers game), and rotations looked better overall. However, we forced them to 11 TOs and only had 4 steals, which clearly indicates we can do better.

76ers game note 3: Terry is finding his role, but two things make me scratch my head: Why aren't we using him in PnR or PnP more? Why are we running him Ray Allen sets, wasn't getting rid of those sets and having a faster/more aggressive Rondo the point?

If you watch the game from the corner/baseline, you get to see the sets more clearly. One thing I hadn't realized until that point was that Terry spent a lot of time running around picks to get opportunities for a 3 pt shot. That is fine, yet it is quite incomprehensible why we don't run a more flex offense and let Terry do what he does best: Pick and pop/roll game.

Any change?: Not really. Terry got 15 points last night, yet most came in Q1 and after that his usage went down. It's good that his shots have started dropping, but I have a feeling that we can still get more out of him by doing nothing about it.

Here it is. I might be wrong on certain issues since this is a belated post, but I think that especially point 3 is worthy of a discussion.