Today's letter, Celtics fans, is 'P' as in pick-and-roll 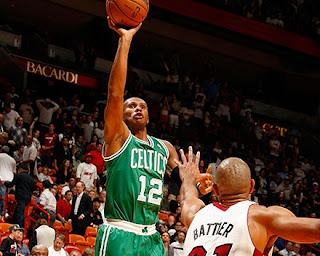 Take a deep breath Celtics fans, and repeat after me: "it is only 1 of 82" and you will be okay. Remember there would have been a mini-coup in South Beach if LeBron and his special edition golden Nikes had lost on His championship night.

That is good, but this is about the Celtics and how they fared. So lets begin.

Jeff Green, well it was his first NBA game in over a year, and the block party that met him at the summit of the rim reminded him off it.

The Jet never took off the taxi-runway. Something about engine trouble. Courtney Lee showed he could score and played admirable defense on Wade. But, I got the feeling Dwyane Wade was toying with him. Avery Bradley's return will put a stop to that.

Sullinger showed that the moment was indeed too big for him, because after all, he is a rookie. And Leandro Barbosa shows that he can be the closest thing to Eddie House shooting-wise with the added benefit of speed and the ability to play defense.

Rondo is still trying to figure out the on-court tendencies of his teammates when the game counts.

All that being said the Celtics have a bright future ahead of them if they just play basketball; pick-and-roll that is. What happened to the pick-and-roll offense that dominated the preseason-offense? They had a lot of side-action with either Bass or Sullinger diving to the basket. Bass and Pierce ran it to perfection once; they never ran it again.

The offense looked eerily like the sets they used to run for their former shooting guard. There weren't that many forays to the hoop by Boston but Miami did set up a Samba line accompanied by a variety of pick-and-rolls.

This was something Doc knew would be an issue; the aforementioned lack of defensive presence.

The pick-and-roll offense is tailored for Rondo's game; the defensive chops to stop it will come.  The shocker being that  it may take the return of Darko to clog the middle and not necessarily Avery Bradley's Mini Pinscher attack alongside Rondo.

So, be comforted Celtics fans. The lads in green will not be the same as you saw last night, they will all be part of one pick-and-roll mind.