Last night's game was disappointing to say the least, and while there were some troubling signs, the Celtics did show the potential to be a contending force. 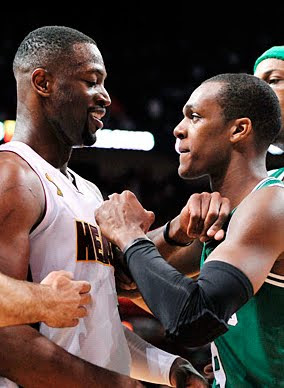 Health: Kevin Garnett and Paul Pierce both looked healthy. KG didn't score much, but he appeared much more fit than he did at last year's opening. The Big Ticket had 2 blocks and 12 rebounds along with 2 clutch buckets. The Truth came out on fire, and even though he started missing late in the game, you have to be pleased with 23 points, especially considering last year he was overweight and missed the opener with a bad heel. The Heart and Soul of the Celtics showed that they have not suffered significant decline since last year, and can still play at the elite level Boston need to contend.

LEANDRO BARBOSA. (And Bass): The Brazilian Blur scored 16 points in the 4th quarter. His playing time will be limited, especially when Bradley gets back, but how reassuring is it to know that if a starter goes down you can bring in a guy with that much firepower? One game in, Barbosa has already shown that he's far more dangerous than the Keyon Dooling's and Nate Robinson's of the past.
Also, Brandon Bass came out and showed everyone why he is still our starting power forward. Sully didn't play much and Jeff Green was a non-factor, but Bass was terrific offensively with 15 points and 11 rebounds, 6 of which were offensive. He vowed to improve his rebounding over the summer, and he definitely backed that up last night. As mentioned in an earlier Bass post, he is most effective when he combines his smooth J with moves to the rim and offensive glass. His performance against the Heat is evidence of just that.

Rajon Rondo: I was most pleased with Rondo's performance last night. Sure he could have hit one of those 3's and made one more free throw, but he played with the aggressiveness that can make him a top 5 MVP candidate. The all-star point guard created for his teammates but was not passive, at times he just put his head down and went right to the hole. He also hit 2 important jump shots in the 4th quarter. The technical and the clothesline on Wade were obviously unnecessary, but the important takeaway is that all the off season talk of Rondo becoming more of a leader was legitimate, and this could be his best NBA season yet.

JET and Green: The Celtics two best bench-players turned in lackluster performances. Jason Terry made some nice plays but he never got in a rhythm, turning it over too much and missing very makeable shots (he even missed his signature shot, a wide open baseline J that left me stunned as it clanked off the rim). Jeff Green was even worse, he looked like a 4-year old lost in a train station. He was totally lost and had no impact on the game. Though disappointing, I wouldn't worry too much about these two. JET is the type of pro who you know will bounce back, this was just an off-night and he's still learning the system. Green just confirmed what I already expected: that he's not gonna look like a 6th man of the year in his first NBA game in 17 months. He already showed his ability in preseason, and I'm confident he will become a legitimate factor as he eases into his role.

Ray Allen: Sugar Ray did not look like the player we had in the ECF last season. His 3's were nothing unusual, but he also went into slasher-Ray mode and had multiple nice drives to the hole. After hearing that his ankles are still bothering him, I thought he would be limited to mere catch-and-shoot. But alas, he's still got it. While his body may not allow him to drive that much over 82 games, the "Ray is so old and gimpy he's gonna hurt the Heat" talk is officially over.

This was one of the most poorly defended games I have seen the Celtics play in 5 years. Their pick and roll defense was atrocious and there was way too much gambling (particularly when Courtney Lee chased Chris Bosh and gave up a key bucket by leaving Wade all alone for a dunk). Our communication was awful. There were several times where you could see one guy try to switch even though the other was staying on his own man. Simply put, the Celtics have major work to do if they want to get back to last year's tenacity.

This was not a very good game for the Celtics, but I see more significance in the good than in the bad. The Celtics are a much better offensive team. Rondo's fast-breaks with Lee and Barbosa in the fourth show how deadly our running game has become, and it will only improve as Green, Wilcox, and eventually Bradley get involved. Our veterans look healthy and Rondo appears ready to elevate his intensity (let's just hope he maintains it against the Bucks and Wizards of the league, who we're playing next). I really don't think you can read too much into off nights for Terry and Green. While our defense might not reach last year's level, at least not unless Bradley can make a full recovery, I am confident that we have enough talent to be a top-tier defensive club after more hard workouts with Doc. The result is not very indicative either way: sure we came back and almost won, but then again, LeBron sat out the end with leg-cramps. One thing is for sure, the Boston-Miami rivalry is as heated as ever.