Scalabrine's coming back to Boston! 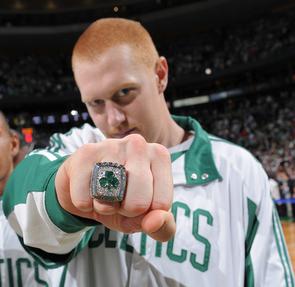 
Brian Scalabrine has turned down coaching job with Bulls and will call games for Comcast Sports New England this season, he tells Y! Sports.

Scalabrine will do color analysis on 11 games for the Celtics, as well as some studio work. "A trial run for both of us," Scalabrine told Y!

Scalabrine isn't prepared to say he's retired from playing in the NBA but concedes, "I had zero opportunities. Not some, but zero."

Scalabrine left open the possibility of taking a playing job overseas in January, but believes he's probably on the TV side for good now.

Scalabrine had chance to join Tom Thibodeau's coaching staff and says, "Saying no to Thibs was the hardest decision I've ever had to make."

This news comes a week after it was believed that Scalabrine had accepted an invitation to join the Bulls coaching staff. But no, in the end he chose Boston. Looks like he will be taking Donny Marshall's color analysis position (on road games that Tommy doesn't attend). I love the idea of Scal doing color commentary. Maybe they even can throw him in there some with Tommy. Or how about they shit can Tanguay and just let Scal run the CSNNE studio?