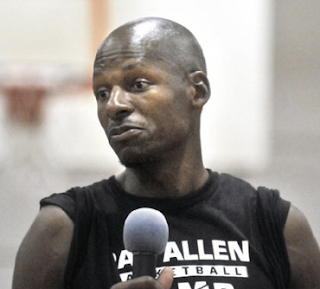 
Ray Allen made his first public appearance back in the New England region Saturday while hosting a basketball camp in Storrs, Conn., near the UConn campus. A quick glimpse at his Celtics-related comments courtesy of the Hartford Courant:
"I was a free agent," he said, "and I had to make a decision I definitely thought was best for me to move forward. I'm excited about where I'm going. … I don't know what to expect, but I know what I expect from myself."

Allen said his ankle is now about 75 to 80 percent healthy, and he expects to be 100 percent when training camp starts next month. The Heat will open the season against the Celtics.

"I look at the guys I played with five years," he said. "I played seven years with the Bucks and four with Seattle, so at some point you're always going to have ex-teammates. But winning [a championship] with the guys in Boston, I have a bond with them. It's going to be a special game, though I am not an emotional person."

I'm over the whole Ray Allen thing, but definitely newsworthy nonetheless. Glad to see he didn't ditch out on his camp. The Hartford Courant has more on Ray and you watch his interview there as well.

Thanks Ace20 for the find.