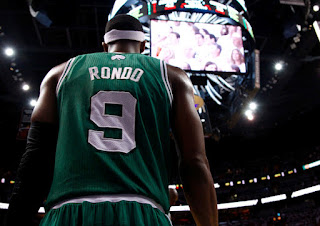 "I think because we have a talented group of guys... the additions of Courtney Lee, [Jason] Terry and Jeff Green," Rondo said.

"We have high expectations every year... I think we got a lot better than last year."
Rondo didn't talk much about Ray Allen leaving Boston to sign with rivals Miami Heat for less money -- except for saying, "he's fine".

The Celtics guard was somewhat skeptical about the new lineup of another rival team, the L.A. Lakers, who now feature stars Dwight Howard and Steve Nash alongside Kobe Bryant and Pau Gasol. Rondo said they've done nothing yet and it's all on paper.

Rondo is in Hong Kong for a sponsorship event, and he trained with young players for an hour on Friday morning.

Is it hypocritical of me to hate Rex Ryan for doing this sort of thing in the NFL, and then love it when Rondo does it in the NBA? Yes, but who cares. I love Rondo's confidence in this re-tooled team.

The Celtics are seen as kind of a contending after thought for this season. In a recent poll of League executives and insiders, the Lakers, Heat and Thunder were all predominantly the favorite to win the title. The Spurs and Celtics were next.

Still, Rondo has reason to be confident. The Celtics gave the Heat a run for their money in the Eastern Conference Finals last year. With a re-tooled, and largely viewed as better team, they should feel like they are one of the only teams capable of beating the Heat in the East.

Rondo's response when asked about Ray Allen shows some more evidence of contempt between the two.

I also like how Rondo randomly threatens to destroy Jeremy Lin when the Hong Kong media asked about him. That's pretty awesome. No regards for the fact that kid is looked at as a God over there.

What do you think of what Rondo had to say?