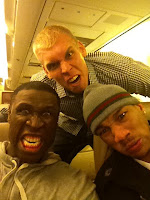 Since the Celtics filled up their roster, many C's fans wondered what would become of Mickael Pietrus, whose outrageous personality caused him to become an immediate favorite.

We heard previously that the Milwaukee Bucks had reached out to Pietrus, but on Thursday, ESPN Twin Cities reporter Darren Wolfson tweeted that Timberwolves GM David Kahn has been in touch with Mickael's camp. While it's a longshot, there is a chance that "Peaches" and former Celtics center Greg "Goldiblocks" Stiemsma might get to be teammates again next season and keep their game faces on together in the Twin Cities.

Nothing concrete, but Kahn has spoken with Mickaël Piétrus' camp. Suppose if Kahn moves a guard, he could become an option. #twolves
— Darren Wolfson (@DarrenWolfson) August 30, 2012


@zschneider Re: Pietrus - It's a long shot to begin with. But remember in Adelman's offense, the 2 & 3 are interchangeable. He can guard 2s.
— Darren Wolfson (@DarrenWolfson) August 30, 2012