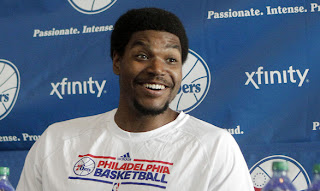 No division in the NBA has improved from last year as much as the Atlantic. It may be a stretch to think all five teams are playoff-bound. However, it isn't far-fetched to think that four of the five teams will be in the postseason come next spring.
Therefore, each week we'll preview one of the five teams that make up the division and see if any of the other four can unseat the Boston Celtics atop the Atlantic to earn a top-four seed. Boston has finished in the top spot for the past five straight seasons. View the Brooklyn Nets and Toronto Raptors previews here.

In this third installment, we examine the Philadelphia 76ers. The third-place team in the Atlantic Division finished last season at 35-31 and earned the final seed in the Eastern Conference playoffs. They finished just four games behind the Celtics. As the eight-seed, Philadelphia beat first-place Chicago before falling in the second round to Boston. Their last Atlantic Division title came in 2001, when Allen Iverson led them all the way to the NBA finals. 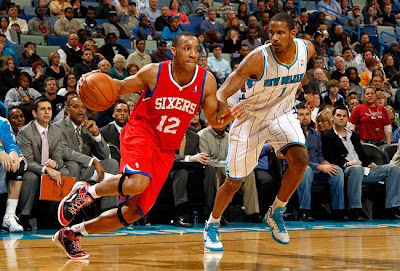 2011-2012 Notes
It was really a tale of two halves last season for Philadelphia. After bursting onto the scene as the surprise team of the first half, they faded down the stretch, going just 14-16 in the final two months. They recovered just in time, winning four of their final five games to earn the eight-seed. They were actually led in scoring by sixth-man Lou Williams (15 points per game), who did not start a single game. The team was anchored by All-Star Andre Iguodala, who put up a line of 12 points, six boards and 5.5 assists per game, while also guarding the opposition's best player. They also received improved play from budding stars Jrue Holiday and Evan Turner.

They somewhat lucked out in postseason, catching the Bulls reeling from injuries to Derrick Rose and Joakim Noah. Still they deserve credit for taking advantage of the opportunity and parlaying it into a tight series with the Celtics in round two. 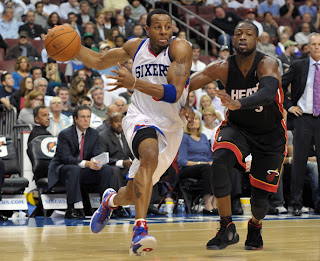 An Offseason Blockbuster
Philadelphia was recently involved in the huge, four-team Dwight Howard trade. Their involvement meant dealing long-time star Andre Iguodala and bringing in Lakers big man Andrew Bynum. They also acquired shooting guard Jason Richardson from Orlando as a part of the deal. Joining Iguodala on his way out the door was reserve Nikola Vucevic and 2012 draft pick Moe Harkless out of Saint John's.

The move gives Philadelphia a dominant big man to battle with the likes of Kevin Garnett, Tyson Chandler and Brook Lopez in the Atlantic. Still they sacrificed a decent amount to bring these players in. They also let go of Lou Williams and Elton Brand in free agency.

Bynum will be the story for the 76ers next season, there is no doubt about that. If he can be mature and grow into his game, then they will be a contender. However, he has proven to have some issues in that department, feuding with Mike Brown in Los Angeles. The concern for Bynum in Philadelphia, along with his injury woes, is that there are no babysitters.

In Los Angeles, Bynum was kept in line by Kobe Bryant, Pau Gasol and even Phil Jackson early in his career. The 76ers had to let their one veteran leader, Iguodala go in order to bring Bynum in. Philadelphia is still a very young team with a coach who has only been there for two seasons. There is not a whole lot of leadership to keep Bynum in check, so if he can't keep himself under control, then the season could go down the drain.

Iguodala was the back bone of a defensive juggernaut last season. The 76ers allowed just 89.4 points per game, good for third in the NBA. With him gone, there is a worry that the defense could lose its way. Jason Richardson is not known for being a defensive player, so a lot is falling on the shoulders of Evan Turner. He has the size and skill to be the best player on this team, but is taking time to develop. Bynum can be defensively dominant when he chooses to be, but he can also play lackadaisically at times. 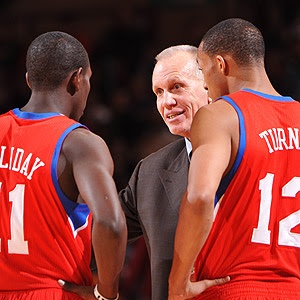 The additions are great, but all have question marks. Richardson's production fell off massively last season in Orlando. He struggled to shoot 40-percent from the field and scored just 11.6 points per game. Both stats were career lows for the 13-year veteran.

Nick Young is an explosive young player, but similarly could not shoot a high percentage from the field with the Wizards and Clippers last season. He will add solid depth and if all goes well, he has the potential to become this season's Lou Williams.

Overall, the risks appear to be great. If they are outweighed by the rewards of Bynum's arrival and Turner's development, then the 76ers could threaten once again. However, it felt like a lot of luck went their way last season. They were a young and inexperienced team, and sometimes the worst thing a young team can do is go through massive roster overhauls. I predict the 76ers will struggle this year, even after their promising performance in the playoffs and the addition of maybe the league's top center.

Something about it just doesn't fit right. The changeover is bothering me and I think it may take another year for the team to mesh and Turner to develop into a full-fledged NBA star.