Avery Bradley on why he's such a dominant defender 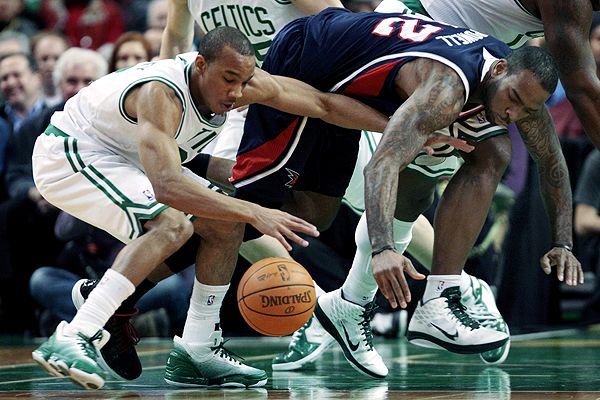 Why is my defense so good?? #topquestionasked
— Avery Bradley (@Avery_Bradley) August 13, 2012

Avery Bradley tweeted the above line late last night and I feel like it perfectly explains part of what makes him such an elite defender and game changer. To be a great defender you have to have some athleticism and you have to bust your ass using that athleticism. Every great athlete in the NBA that's a subpar defender it's because they don't try hard enough on that end of the floor.

Next you have to be intelligent. If a player has a weak left handed dribble, why play him straight up? You also need to know when to double and when not to leave your man open. With all that said, to be your absolute best at defense, Bradley is correct in saying you can't care about being embarrassed. If a guy crosses you over or dunks on you, so what?

Everyone made such a big deal over Blake Griffin's dunk on Kendrick Perkins last season. A lot of people (and NBA players ) suggested Perkins should have avoided that poster. That's weak. Giving up 2 points just to avoid embarrassment is not a winning thing to do. There's a reason Kendrick Perkins teams always go deep in the playoffs. And there's also a reason why some guys can't make it past the first round.

To be an elite defender, you're going to get embarrassed sometimes. So be it. 2 points are 2 points. I've seen Bradley made to look a fool on defense (Jeff Teague of the Hawks killed Bradley one game during Avery's rookie season). But much more often than not, Bradley dominates on the defensive end. It's because he's less scared of getting beat and more concerned with stopping you.

Avery Bradley also gave Kevin Garnett a lot of credit for his development. You can click here to read the money quotes.