What the Hell Happened to...David Wesley? 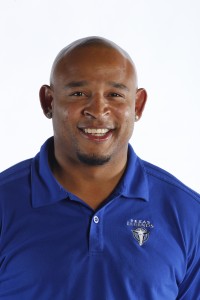 Some guys are hyped up starting in 8th grade about becoming the next big thing in the world of basaketball.  And some aren't.  This week's featured WTHHT player falls into the latter class.

If you remember David Wesley you remember a guy who was an underdog.  He wouldn't stick with the Nets (he did).  He played well but it was a fluke and in Boston he'd disappoint (he didn't).  Signed as a free agent, Dana Barros would play ahead of him in Boston (didn't happen).  He was the weak link on Charlotte who would see a drop-off since Kenny Anderson left (they improved).  He couldn't play in the backcourt as an offguard with Baron Davis (he could and did).  He was too old to help the Rockets with Yao and T-Mac (he wasn't.)  Year after year, team after team, David Wesley proved people wrong.  When do critics finally sit back and say "hey, we were dead wrong on David Wesley; this guy can play?" 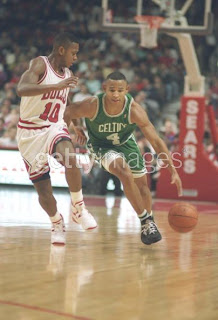 Say what you want: I'll take David Wesley's career over Kenny Anderson and Rod Strickland.  Both of those guys had much more hype and more flair.  But I'll remember Anderson and Strickland as guys who never got to the level they should've.  Wesley exceeded that.  If you never got to see David play, he was a testament of hard-work paid off.  You don't finish as the highest undrafted NBA scorer of all time without embodying hard work.  He was a very solid perimeter shooter, a tough defender and a good passer.  He may not have been the purest of point guards, but he played it very solidly.  He was on some strong Hornets teams in the mid and late 90s that consistently made the playoffs and competed.  His team with Bobby Phills, Glen Rice, Anthony Mason and Vlade Divac was a tough one.

Just a 6'0 guard out of unheralded Baylor, Wesley became all that and earned all the contracts he was paid.  And yes the Celtics team he played for was god-awful but just like every other dumb move the Evil Emperor made, David Wesley was left to walk when him and his trusty Buffoon arrived.  If Wesley would have stuck around, maybe he would've been the influence Chauncey Billups needed to blossom.  Maybe Chauncey stays.  Maybe that's enough for the 2002 Celtics to get by NJ and get to the Finals.  But it's all speculation. 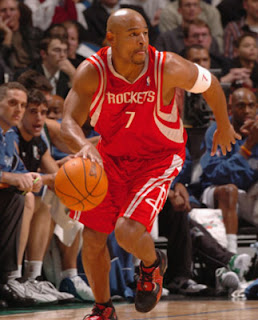 People may or may not recall that David was drag-racing fellow starting backcourt mate Bobby Phills when Phills' lost control of his car, crashed and died.  It took David a long time to overcome that tragic moment as he was very close to Phills.  David needed psychological help to deal with the accident afterwards.  David still considers one of the most fun nights of his life when he was at a blackjack table in Las Vegas and he wanted to walk away, but Phills kept encouraging him to stay with it, that they could make it all back up. And finally, they did, and, earned a lot more after that.

After his playing career ended in 2007, David finished a promise he'd made to himself years ago: he returned to Baylor University to get his college degree in physical education.  During his time there, he served as the student manager on the men's basketball team. 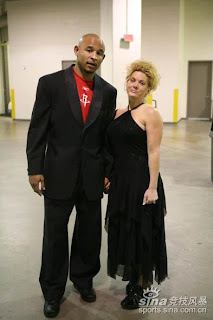 “I always thought, even when I was younger, that I wanted to be a coach. I really enjoyed my time there. Being the student manager opened my eyes to the role of a coach. It also opened my eyes as to what college basketball is all about, a different side from when I played. I also had to develop a coaching speak, so to speak. I had to learn how to take all the knowledge that I’ve learned throughout all my years of playing and graduate that into teaching, so guys can understand it.”

David had decided to take that experience and apply it and today, is an assistant coach in the NBDL for the Texas Legends under head coach Del Harris.  But as of August 22, 2012, David has moved on to become an announcer for the Hornets Pelicans.  Hopefully he doesn't suck at it, and is more like Grant Long.  He lives with his wife Shannon and their three kids, Hallie, Jada and David Jr.