What the Hell Happened to...Earl Tatum?

Long before Jay Z dubbed himself "the black Brad Pitt," the late basketball legend Al McGuire dubbed this week's player "the black Jerry West."  For the second time in What the Hell Happened To we remember an alumni of famous Mt Vernon High School in NY (the first being Ray Williams), Earl Tatum.

Earl was a High School All American at Mt Vernon, whom he lead to a #1 US High School Ranking.  After being recruited by 390 colleges, he decided to play for McGuire at Marquette.  An amusing act by McGuire during breakfast convinced Earl:


"The hotel I stayed at had this huge breakfast spread," recalls Tatum, of his official visit to Marquette in the spring of 1972. "I'd just finished eating when Coach McGuire came in to pick me up. He lifted the napkin off my plate and started eating with his hands the remaining scraps of food under it. I was leaning towards attending Indiana, but that one act convinced me to go to Marquette. He was so at ease with himself and unconcerned about how it might look. I knew there and then that I wanted to play for this man." 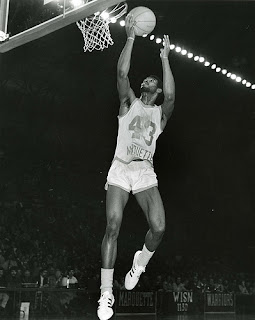 His senior season he helped Marquette reach the Final Four.  In 1976 Tatum would be picked by the enemy with the 21st overall pick (second round back then).  After a season and a half for lal, he was shipped along with James Buddha Edwards to the Pacers for Adrian Dantley and Dave Robisch [Tangent time: we all know what a disastrous head coach Adrian Dantley was but I honestly never knew he played for the Flakers.  It makes it all the more disappointing that the Pistons moved him for Mark Aguirre, to placate Isiah, since Aguirre was buddy-buddy with him.  Dantley would've been on the 89 Pistons that swept the Flakers in the Finals and he could've relished that moment even more].

After one season with the Pacers, Tatum would arrive in Boston.  Red Auerbach for one was stoked:

We wanted a big, quick defensive guard and we decided Tatum would give us that as part of our rebuilding program.  I place Tatum in a class with a handful of guards in the league with his kind of quickness.  Gus Williams of Seattle and Doug Collins of Philadelphia are two who come to mind.


Earl would only appear in 3 games for the Celtics during that 1979 season and was moved in October of his first year.  It must've been unusual for that team, knowing that Larry Bird had been drafted the season before and would be joining the Celtics.  That team wasn't very good but the Celtics were able to obtain Chris Ford for Tatum when they traded him to Detroit.  Ford would be the starting 2 guard on the 1981 Celtics team that won it all. 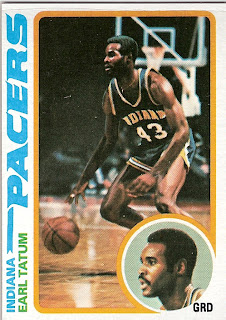 After finishing the 1979 season with Detroit (and playing in all 82 games) he was moved by the Pistons to the Cavs for Jim Brewer.  1980 would be his last season in the league as Earl appeared in 33 games for Cleveland.  A serious knee injury is what ended Earl's career.  And though he diligently tried to rehab his knee, he'd play overseas in both the Philippines and Sweden.  Tatum retired from basketball for good in 1983 and settled in Milwaukee with his wife, Larena.

Looking back on his career, Earl seemed to embody an NBA journeyman.  It's as if no team really gave him a fair shot to stick around.  He averaged double figures in points, putting up over 14 per game for LA and Indiana the year before he was acquired by Boston.

For 23 years Earl sold insurance for Farmers Insurance.  He retired from that in 2006.  Tatum can often be found at the McGuire Center, volunteering his time on a committee formed by Marquette Associate Athletic Director Jack Harbaugh, that reaches out to former players.  He did suffer a stroke back in 2008 but appears to be doing better now.  He resides in Milwaukee with his wife Larena.  He has two daughters in their early 30s, named Jennay and Mia.