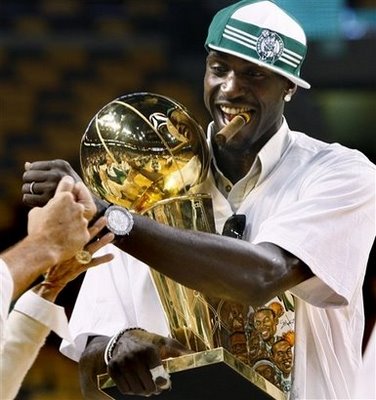 Credit to Celtics radio announcer Sean Grande for pointing out that Kevin Garnett's 5000th career assist this weekend put him in some very exclusive company. Kareem Abdul-Jabbar and Karl Malone are the only other two players in NBA history to total 20,000 points, 10,000 rebounds and 5000 assists.
If that was all we were reporting that would be pretty special in and of itself, but Grande adds that in addition to the 20K, 10k, 5K numbers, KG also has 1500 steals and 1500 blocks. So to sum things up KG is the only player in NBA history to score 20,000 points, snatch 10,000 rebounds, dish out 5000 assists, amass 1500 steals and reject 1500 shots.

The game has never seen a player who can  do as much as KG has. Granted the KG we've seen in Boston is a slightly watered down version than the one than put up ridiculous numbers in his 20's in Minnesota, but he really hasn't lost that much. The main difference is his minutes per game in Boston have been closer to 30, while in Minnesota they were closer to 40.

Based on per 36 minutes, even this season KG is averaging only 1.5 points, 0.9 rebounds,  0.8 assists, 0.2 steals,  and 0.2 blocks less a game than his a career average. With all that wear and tear and a bum knee that's pretty remarkable. It's probably the reason teams are lining up to try and sign him this offseason.


While numbers wise, Boston KG is somewhat similar to Timberwolves KG, you really had to see KG in his prime to get the one of a kind nature of his game. He was a 7 foot athletic freak who could guard point guards and centers alike, score down low and outside and pass the ball. The Wolves used to run a zone with KG at the top of the key. What other 7 footer could do that? Then there's also the factor that KG is probably the most intense and crazy mofo that ever laced up a pair of high tops. It's a pity we only got to see Garnett in Boston from his 13th season on and then he had the knee injury, but the stats down't lie. KG was and still is one of a kind. 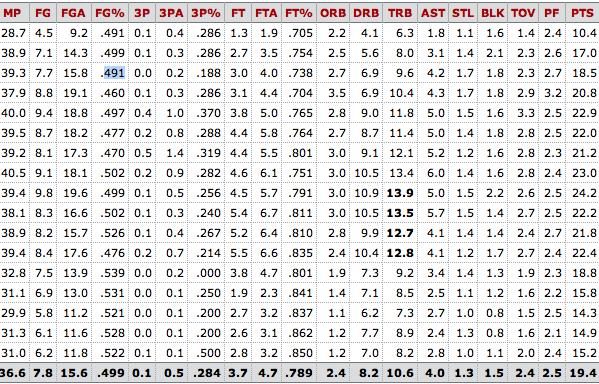