McHale: "I will always be grateful for Red for not trading me" 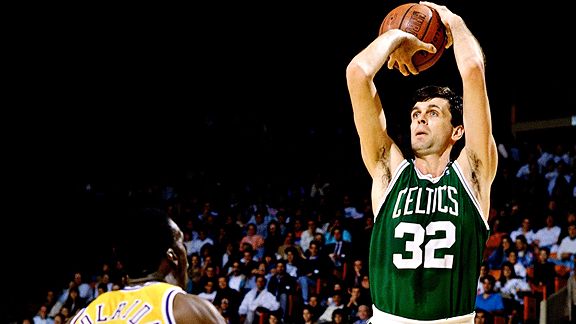 Earlier this morning we shared from Jackie MacMullan's new column on ESPN Boston that Robert Parish late in his career nearly brawled with Michael Jordan. Another great quote comes from Kevin McHale on Red's loyalty.

Celtic lore tells us Boston fielded proposals that would have sent Bird to Indiana, McHale to Dallas and Parish to Seattle, but Auerbach refused to pull the trigger on any of them.

"I will always be grateful for Red for not trading me," McHale said. "It meant the world to me to play my entire career with the Celtics. I know people want to criticize him now but I loved the fact Red said, 'Screw it, these are my guys.' There was real honor to it, something you hardly ever see today."

Of course this is extremely relevant today as Danny Ainge is rumored to be shopping another Celtics Lifer, Paul Pierce. McHale was all about loyalty and you got to love him for that. While some people claim he gift wrapped us Kevin Garnett, I disagree. We traded fair value for an older star with one year left on his contract. With that said, I do remember when McHale had a chance to trade his young free agent Tom Gugliotta for another young star in Eddie Jones, but he declined saying he wasn't going to help out the Lakers. That he's rather just let Googs walk.

McHale's teammate Larry Bird disputes the idea that Red even contemplated trading any of the original Big Three. He calls Danny Ainge's statement to the contrary "BS."

Bird wonders aloud if some of the so-called deals fall under the category of revisionist history. He points out that as late as the 1990-91 season, the Celtics were 29-5 and legitimate contenders before his back went out and McHale sprained his ankle.

"I think those trade rumors were BS," Bird said. "Danny [Ainge] can sit there and say he talked to Red about trading us before we got too old, but all I know is I talked to Red all the time and he never -- ever -- told me, 'I could trade you for Chuck Person' or anyone else."

One gets the feeling that Bird isn't the biggest Danny Ainge fan. I know they weren't close as teammates and it appears that has continued post playing careers. Personally, I get the feeling that if Ainge could take back the whole, "I told Red to trade them" line now he would, considering the unenviable position he is in now.

For the record, the Celtics didn't go two decades without a championship because Red held on to the Big Three. It's because Len Bias died, and then they messed up the Michael Smith draft (Could have had Shawn Kemp or Tim Hardaway), then Reggie Lewis died, then they missed out on Duncan, and on and on. They weren't going to win a championship with Chuck Person or Sam Perkins anyway. Red did the right thing letting Bird and McHale play their whole careers as Celtics, despite what Danny Ainge wants you to think.