What the Hell Happened to...Ron Bonham? 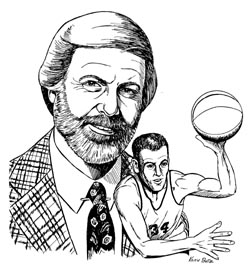 This week in What the Hell Happened To, we go back to the 1960s to remember a man of two nicknames: the "Blond Bomber" and the "Muncie Mortar."  If you're familiar with Celtics basketball or basketball in Indiana, you'll definitely remember this week's player, Ron Bonham.

Ron grew up in Indiana, breaking all kinds of scoring records for Indiana High School basketball.  As a senior in high school he averaged 28 points per game and received the prestigious award of "Mr. Basketball" for the entire state of Indiana.  After graduating Ron had more than 300 colleges pursue him.  To the chagrin of Indiana fans, Ron took his talents to the University of Cincinnati, just like another former bigtime Indiana talent, Oscar Robertson.  Bonham expounds:

It was hard decision.  I talked it over with my parents and we narrowed it down to two schools- Cincinnati and Purdue.  Attending a basketball school was important to me.  Purdue was known more as a football power while Cincinnati was a power basketball program.  And with Oscar being there- he was a senior in college when I was a senior in high school- I just couldn't pass up the opportunity to play for the Bearcats. 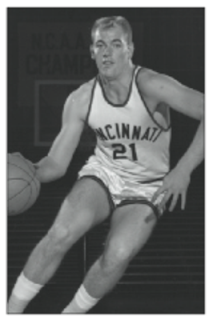 Ron would finish as a two-time All American selection at Cincinnati when he was drafted by the Celtics in the 1964 draft with the 16th overall pick.  And just like Mel Counts, Bonham wasn't quite ready for what was in store for him:


I was talking to Red on the phone after the draft and he says 'Bonham you're going to be in the best shape of your llife.'  At the time I thought I was already in great shape.  I worked out 6 hours a day in high school and kept myself in peak condition throughout college.  But then I went to Boston and there were three openings and between 50 and 60 people competing for those spots.  After that first day with Auerbach there were just a handful of people who came back.  I can remember Tommy Heinsohn being carried off the floor after practice because he passed out. 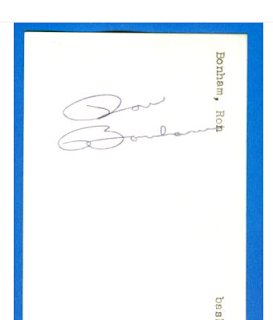 Ron would survive training camp and along with Counts, made the Celtics' team, both as rookies.  He'd play just two seasons with the Celtics but won two titles.  His first year with the Celtics he actually averaged 7 points per game in 10 minutes per night.  He'd be drafted by the Bulls in the 1966 expansion draft but never played for them.  He did however latch on with his hometown Pacers the following season, during the 1967-68 campaign.  His experience with them wasn't as memorable:

(Playing for the Celtics) spoiled me, because I was on that first Indiana Pacer team when it was in the ABA.  Everything with the Celtics had been first class and it was just the exact opposite in Indiana.  We sat in airports all night long, things like that- just a lot of disorganization.  That was never the case with the Celtics, and all that credit goes to Walter Brown.


After the one season with the Pacers in the ABA, Ron retired.  Up until 2011, Ron had been the superintendent for Prairie Creek Park, for 37 years.  Right after retiring he had served 12 years as the Delaware County Commissioner in Indiana while maintaining his responsibilities at the park, simultaneously.   Apparently he was recently let go from that position, and while this one guy thinks he should be invited back, some others say he didn't do that well a job towards the end.  Regardless of your stance, Ron seems like a great guy and was proud of his time with the Celtics.  He also has a daughter named Nicole.

**Addendum 4/18/16** Ron passed away at the age of 73. CelticsLife wishes his family the best during this difficult time.