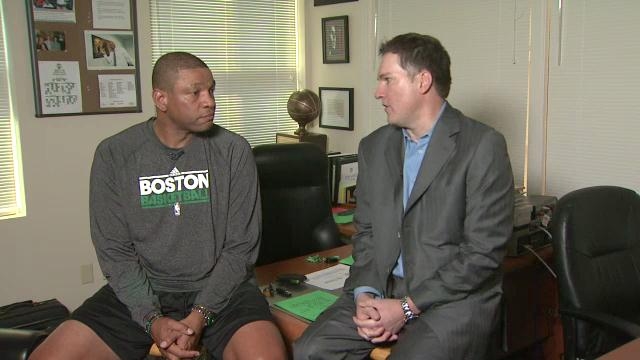 Remember during preseason and the beginning of the season when Celtics sideline reporter Greg Dickerson was missing from the CSNNE telecasts? I recall being worried that he got fired during the offseason and lamented why not Gary Tanguay. I've always liked the job Dickerson has done. It turns out he's had to battle a lot in life, that we never knew about.

Imagine coping with the tics, twitches and urges of Tourette syndrome and obsessive-compulsive disorder, the threat of seizures and memory loss from epilepsy and the possible side effects of medication while interviewing Celtics captain Paul Pierce on television on the Garden parquet after he hit a last-second, game-winning shot.

The Celtics sideline reporter for Comcast SportsNet disclosed a couple of weeks ago that he had been diagnosed with epilepsy after suffering two seizures, the second of which forced him to leave a Celtics broadcast at the Garden. But during an interview with the T&G this week, Dickerson revealed for the first time publicly that he has also suffered from Tourette syndrome and obsessive-compulsive disorder for 15 years and dyslexia, a reading disability, since the third grade.

Dickerson said spells of stuttering and involuntary mouth movements began last spring, but worsened in late December to the point where he could barely speak due to spasms in his tongue and jaw. Dickerson called himself “a complete train wreck on the air” during the Celtics' preseason game Dec. 21 at the Garden. The next day he had to leave work and skip a taping of a Celtics season preview show.

Dickerson's twitches receive more notice than for most people with Tourette syndrome because he appears on television with thousands of people watching him. Sometimes Dickerson can't control his tics, but other times he can by concentrating. If he feels the urge to twitch his neck, shoulder or eyes, he'll tap his foot or clench his fist instead.

Dickerson wouldn't describe his case of Tourette syndrome as mild.

“It's pretty severe,” Dickerson said. “On a scale of one to 10, it's not a 10, but it's probably a six. I think there's a lot of confusion about Tourette's and OCD. People think automatically that you swear. That's the nth degree of it. But it's pretty severe. It's hard for me to sit down, it's hard for me to go to bed because I'm always twitching around and have involuntary movements. It's pretty difficult, but you learn to live with it. I don't like it, but I live with it.”

I think it's pretty awesome what Dickerson has been able to accomplish. It would be if he didn't have these neurological disorders. The fact that he has such a successful career despite them says a lot.

Dickerson draws his strength from his loving and supportive wife, a son he adores and a job that fulfills him. He realizes that lots of people have more serious problems.

“There are people with brain tumors, cancer, Parkinson's at age 40,” he said. “There are people who die of heart attacks at age 38. There are people who have been out of work for two years. I've got the most unbelievable job for which I get paid a stupid amount of money to do something I absolutely love and cherish. I'm about to go on a treadmill and run four miles so I've got my health from that standpoint. I still live my life pretty well. I'm pretty lucky.”

I obviously love watching Mike and Tommy and want to see them together for many more years. I've always been happy with the job Dickerson does and hope he stays on the broadcasts just as long. His story makes you root for him and he's definitely an inspiration for others living with Tourette syndrome, obsessive-compulsive disorder, and epilepsy.

You can read more at the Worcester Telegram & Gazette