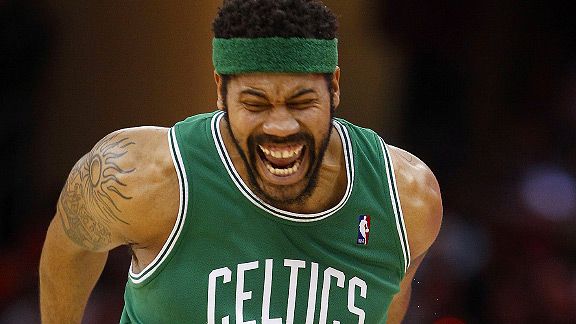 
There's at least one team apparently still with a need for Rasheed Wallace.

CSNNE.com has learned that the former Boston Celtic forward plans to sign with the Los Angeles Lakers.

Wallace hasn't played in an NBA game since Game 7 of the 2010 NBA Finals, alerting the C's shortly before the game that he planned to retire.

Although he had two years remaining on his contract, Wallace and the Celtics came to terms on a buy-out of the remaining years believed to be worth about $1 million.

His return to action has been rumored for weeks, fueled by a decent showing at Pro-Am tournament in North Carolina this summer.

It only became heightened by, according to league sources, a renewed conditioning regimen that apparently has him looking better than he has "in years."


With a roster of 14 players, the Lakers can add Wallace and not have to worry about waiving a player to make room.

His addition will likely fuel rumors that the Lakers will become even more aggressive in their decision to trade away Pau Gasol.

I guess they're getting pretty desperate in La La land.

Bill Simmons nailed my view on Rasheed in his column yesterday.


Ordway: "Our next guest was nearly arrested for stealing money during the 2009-10 season. After signing for $18.9 million as Danny's big offseason move, he showed up out of shape, remained that way and broke the team's record for 'most mailed-in practices.' A horrendous influence on younger teammates, this man was so reviled by fans that you could make a case he's the least popular Celtic ever."

Heinsohn [in background]: "My vote still goes to Curtis Rowe!!!!"

Ordway: "Hold on, Tommy, I'm not close to being done yet. Our next guest also became the first NBA player to play an entire regular season out of shape, then use actual playoff rounds for his conditioning. In Game 7 of the NBA Finals, he was forced to play 35 minutes because of Kendrick Perkins' injury — he ran out of steam and the Lakers ended up with an 18-rebound advantage, one of the biggest reasons Boston lost that game. If he had cared even 10 percent more, the Celtics would have won the title that year. Then again, how can you care 10 percent more if you don't care at all? Thankfully, he retired and saved fans from watching him loaf for two more years while simultaneously killing Boston's cap. And now, he's loafing onto the stage … ladies and gentlemen, Rasheed Wallace!!!"

[We hear some scattered boos and jeers, but the members of the Celtics are inexplicably applauding. We see KG happily point to Rasheed.]

Wallace: "Danny, I'm mailing in this speech like I mailed in that season. Ball don't lie! Thank you!"

[Rasheed exits the stage laughing and heads back to the buffet table.]

I'm sure some fans wanted him back in Boston, but the Celtics were clear from the get go they had no interest in more 'Sheed and Wallace also had said he wasn't interested in the Celtics either.

Anyone think Rasheed will be a difference maker and lead the Lakers back into the Finals?