The Need for a Good Bass

"Guitar is for the head, drums are for the chest, but bass gets you in the groin"
-- Suzi Quatro 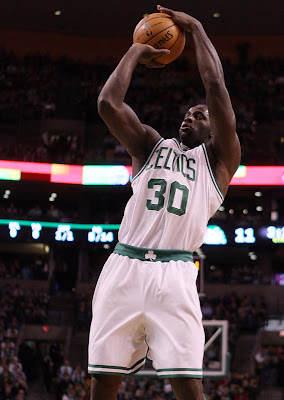 A group of people join their talents for a common goal: to create the finest piece, the masterpiece. As a rock fan you can always recall the voices of Ronnie James Dio, Axl Rose or Rob Halford, the guitar solos of Hendrix, Angus Young, the drums of Lars Ulrich. Those are the leaders of their bands, the artists we focus on when we are watching them performing live and they are the ones that fill up posters in our rooms.

We rarely speak of Steve Harris or Cliff Burton.

But as the bass guitar is the spine of the song, the part no one cares for but without which the piece would be empty, rootless and meaningless there are some players in some teams that do some basic work for their squads.

Our Bass is named Brandon.

Brandon strikes swiftly, rises once and again and never doubts in shooting and driving to the hoop to inflict the suitable note for the team to reach its goal: the win.

During the first games in the season, Brandon was one of the few bright spots for our aging team. He built an instant chemistry with our mercurial point guard, Rajon Rondo.


He is the main athletic player on the team and one of the most powerful offensive weapons from the bench. He can create his own shot and is developping his defense. He is the perfect sixth man, the silent killer that makes the second unit be an offensive threat with Mickael Pietrus.

Without Bass, the team has lost 5 of the last 6 games. It is clear the song lacks the background punch, the piece that makes it all bigger, wider and fresher.

The song needs the bass, the Celtics miss their Bass