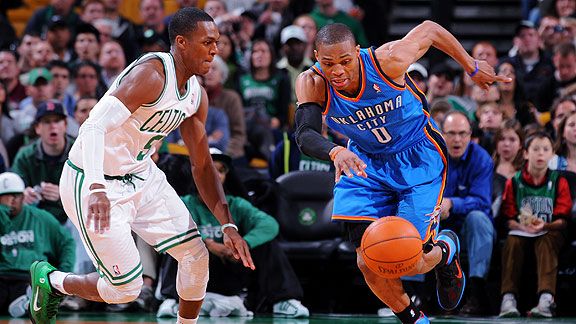 Ok unless you have your head in the sand, you should be aware by now that Danny Ainge isn't the biggest  Rondo fan. He liked him enough to draft him, but since he's been in Boston Ainge has offered him in trades for the following players: Robert Swift, Tyreke Evans, Rodney Stuckey, Russell Westbrook, Carmelo Anthony, and Chris Paul. Now those are only the players that multiple sources have confirmed. I'm sure Ainge has offered Rondo for others as well. Ainge simply doesn't see rondo as the #1 guy to build a new team around.
One of the names from rumors past, could start coming up again next week. Russell Westbrook is looking to get paid $40 million more than Rondo, and unless the Thunder can talk him down, they'd look to trade him. Previously the Thunder have said no to Ainge's lustful Westbrook eyes. I'm not sure why they've said no. I think a Rondo, Harden, Durant, Ibaka, Perkins team would be ridiculously good, but that's their GM's prerogative. If Westbrook won't play ball with the Thunder then that changes the game plan. Thunder GM Sam Presti would be forced to try and get the best player he can for Westbrook, while simultaneously making sure that player is paid significantly less. He could do no better than Rajon Rondo.
Obviously Presti and Ainge aren't afraid to deal with each other. The Thunder have until January 25th to agree to an extension with Westbrook. If they do, then we can finally put to rest the Rondo/Westbrook rumors. If they don't, expect the rumor to pick up tons of steam the next two months. It makes too much sense for the Thunder, and while personally I'd much rather have Rondo on a $55 million dollar contract then Westbrook at $94 million, I don't run the Celtics. Danny Ainge does. And Danny likes to offer Rondo in trades, likes to deal with the Thunder, and has eyes for Russell Westbrook.
The sad truth is if Presti offered Westbrook for Rondo today Danny would say yes. And if if he offers it next week, Danny would still say yes. Presti's not offering Westbrook today. He could be starting next week. Keep an eye out to see if how these extension talks go this week. They will determine Westbrook's future in Oklahoma City, but they very well could also determine Rondo's in Boston.